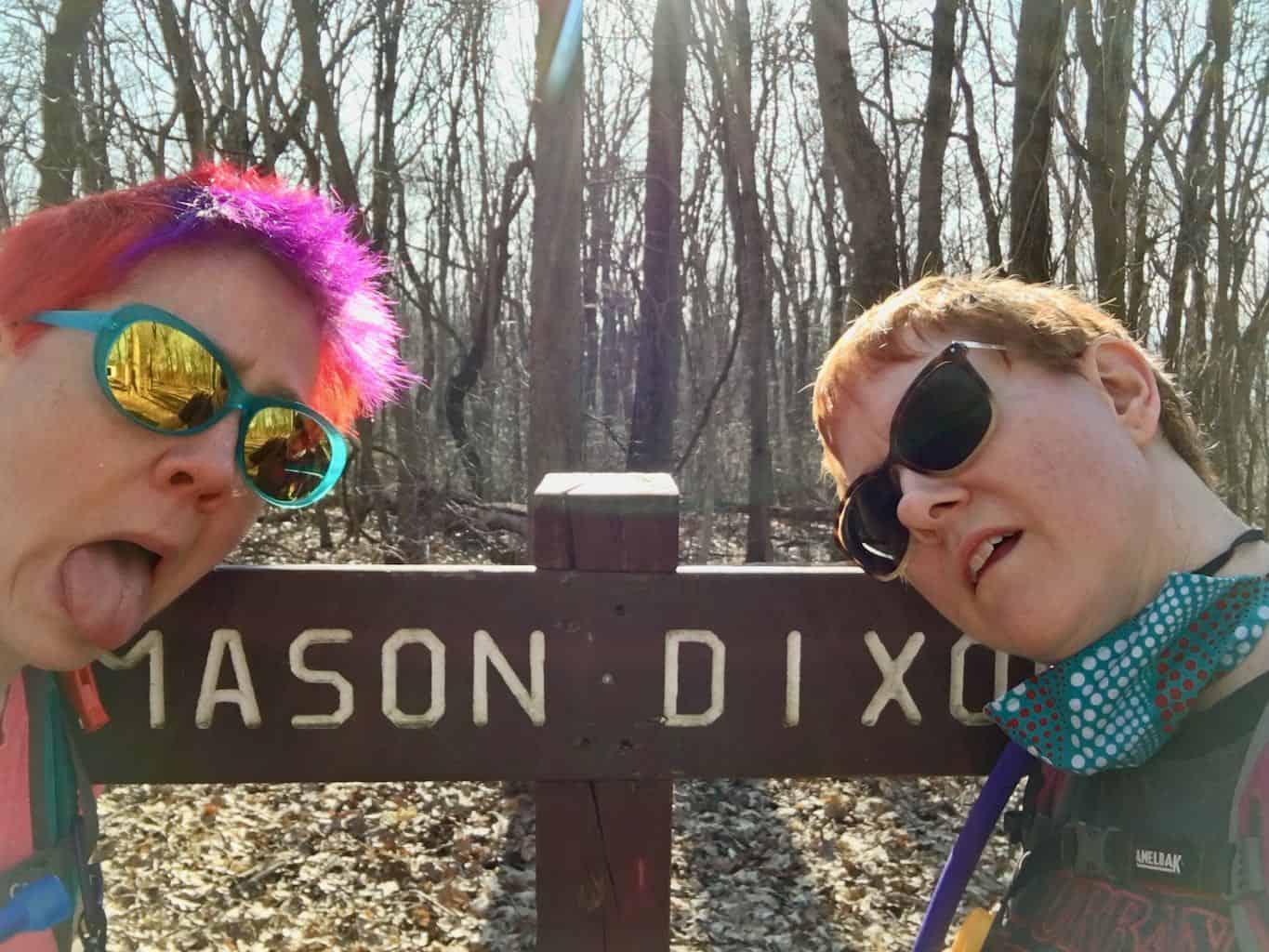 Don’t be fooled by the elevation map! Stretching its 2700 feet of elevation over a pleasantly wooded 14 miles, Pen Mar to Old Forge is a gently rolling death march, not the alpine jungle gym that may be inferred. That 75 minutes we spent not moving is um …. okay, this one’s a bruiser. We were done after 10 miles, but there’s no shuttle bus.

If you tackle this hike in COVID times, you’ll walk an extra half mile across a gargantuan, closed parking lot to the open overflow lot across the street. Don’t expect the bathrooms to be open. Unlike other Maryland parks with trailheads, Pen Mar does not provide portapotties (shout out to Catoctin and the Frederick Municipal Watershed), and there are no fast food or gas stations in the vicinity. If you have to poop, do it in Frederick.

Pen Mar Park, where the hike begins, has a lovely overlook. With pavilions, a bandstand, restrooms, and a concession stand, the implication is that this is a happening spot in the summer. Not so much in March, fortunately.

We look so fresh and springy, off to conquer our 14 miles!

After a mile or so of grass and soft dirt and some road and rail crossings, you find yourself on what you expect from the Applachian and Trail: roots and rocks.

There are a number of road crossings early on. One of them is pretty busy and you have to run across between cars. Once you get those out of the way, you’re back in unbroken woods.

The road crossings are replaced with what seem likely to be snowmobile trail crossings, so there are frequent admonitions to not ride your bike/horse/motorized doodad on the AT. Looks like someone’s been chewing on this one.

It was around this time (one-third of the way through the hike) that I observed that the blisters I was getting were worse than they have been recently, and realized that I’ve been wearing my recently-acquired waterproof hiking shoes, a different model of Hoka One Ones, lately, what with it being snowy and muddy and generally winterish. They seem to cause less blistering. Dearest blue shoes, you are now relegated to walks around suburban lakes on pavement.

As you approach Old Forge (the park at the other end of the seven miles), you cross both forks of a river with a cute little island in the middle.

Dar’s feet were happy to take a break for lunch at the Old Forge park. We had each drunk exactly half of the water we’d bought, so we added to our Camelbak bladders at the year-round spring, which has a motorized pump house around it and a faucet for filling your vessels.

This spring and our election to make use of it reduced the misery of the return journey. We both ended up drinking more water than we’d originally brought, and we’re pretty good at over-provisioning. The hike back was directly into the sun, with little shade due to the season, and the temperature had increased to the point of t-shirts and capriing of pants. Sunburns were had, and I drank half a liter more on the way back than on the way out! My feet and hips were already angry on the last 25% of the hike, and running out of water would have ratcheted up the misery.

Followed by plodding misery for some hours, during which no one had the heart to photograph anything.

Descending into the last valley, we girded ourselves for the Steep Up on the other side.

The bridges along this hike are top-notch, by the way. 10/10 for engineering.

In the first/last valley, there are some fallen trees with huuuuuge rootballs.

As we slogged up the last hill, we dreamt aloud of making it to the car and sitting down.

And then remembered all those railroad tracks, roads, and grassy paths that lay between the main trail and Pen Mar Park.

We concluded during this hike that future endeavors shall be limited to around 10 miles. Dar will remind me that I insisted on going ALL THE WAY TO THE TURNAROUND, LOUDLY, IN ALL CAPS, A NUMBER OF TIMES.