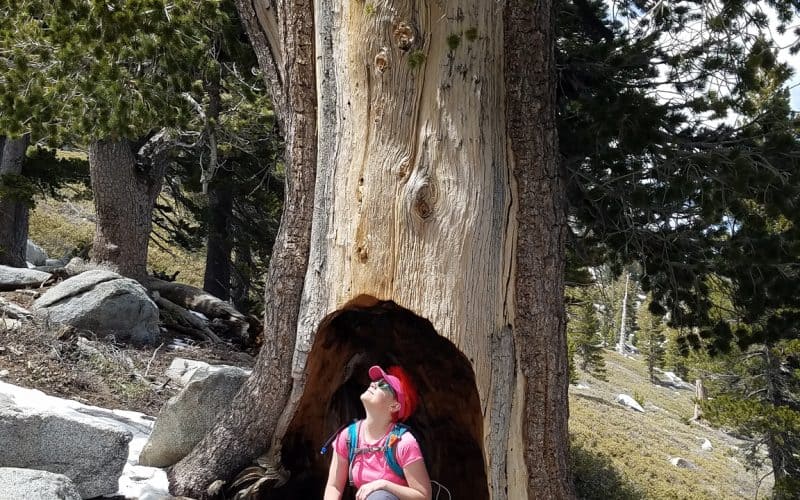 On the third day of our stint in Idyllwild, we tackled San Jacinto Peak by way of the Palm Springs Aerial Tram in Mt. San Jacinto State Park. With the road out of Idyllwild to the north permanently closed by a mudslide, we had to drive 1.5 hours south, through the desert, and up north again to the Aerial Tram.

I used my AllTrails Pro subscription to download a map with the trail already marked and track our progress on my phone without a cellular connection to make sure we didn’t get off track. I lost cell reception before we even got to the trail, and California is not into trail markers. What gives, California? Give your Search & Rescue teams a break, keep hikers from accidentally getting lost. The lack of trail markers was especially bad on this hike where half the trail was hidden under snow, and everyone was peering around and navigating by looking for where others had walked.

We went on a Saturday, and there were many hikers on the first 2/3 of the trail. They did thin out as we got closer to the peak, and we passed most hikers on the lower half. It was fascinating to see how many people heading into a strenuous hike in a wilderness area didn’t have poles. Californians must be made of stern stuff.

The views from the upper trail are incredible, and surprisingly reminiscent of the mountains we climbed in Romania! Despite it being June, half the trail was still covered in slippery snowpack, and we both wiped out a couple of times on the way down.

The road from Idyllwild down to the desert floor is veeeeeery switchbacky.

For two eastern forest flatlanders, the drive through the desert is an alien landscape. 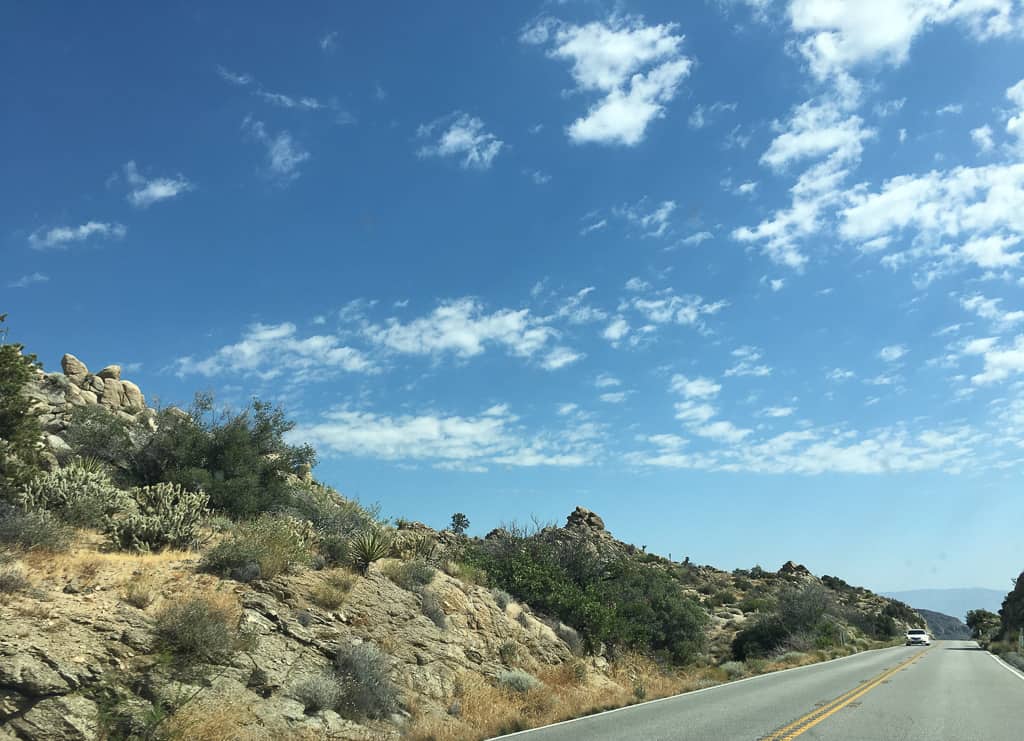 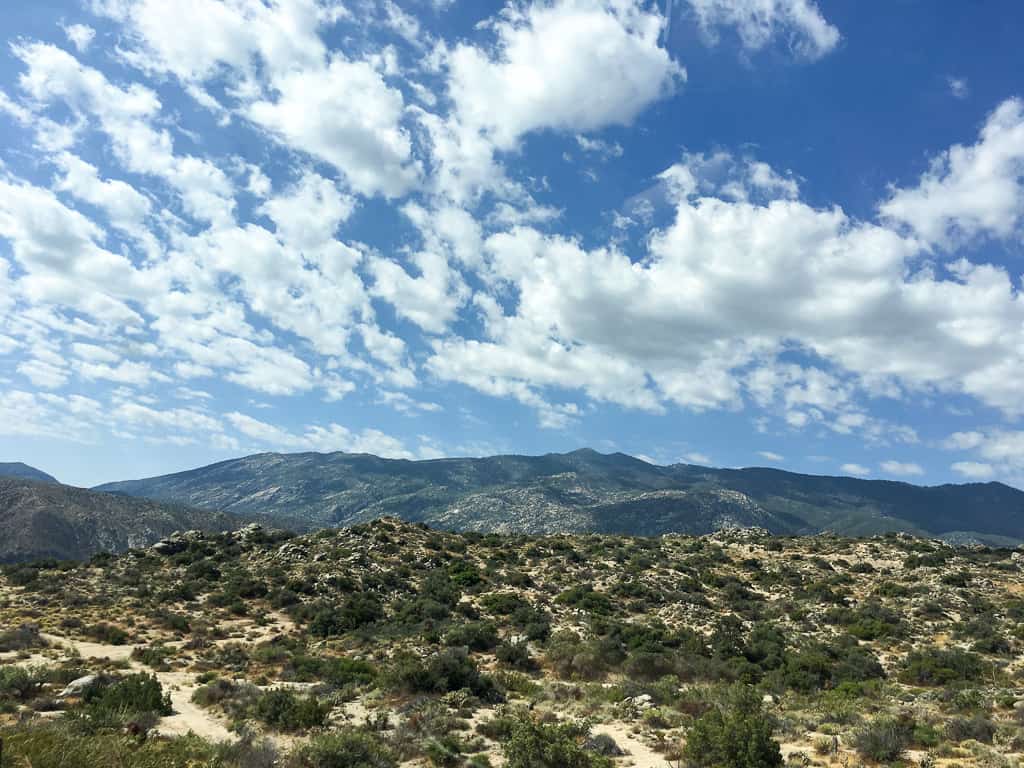 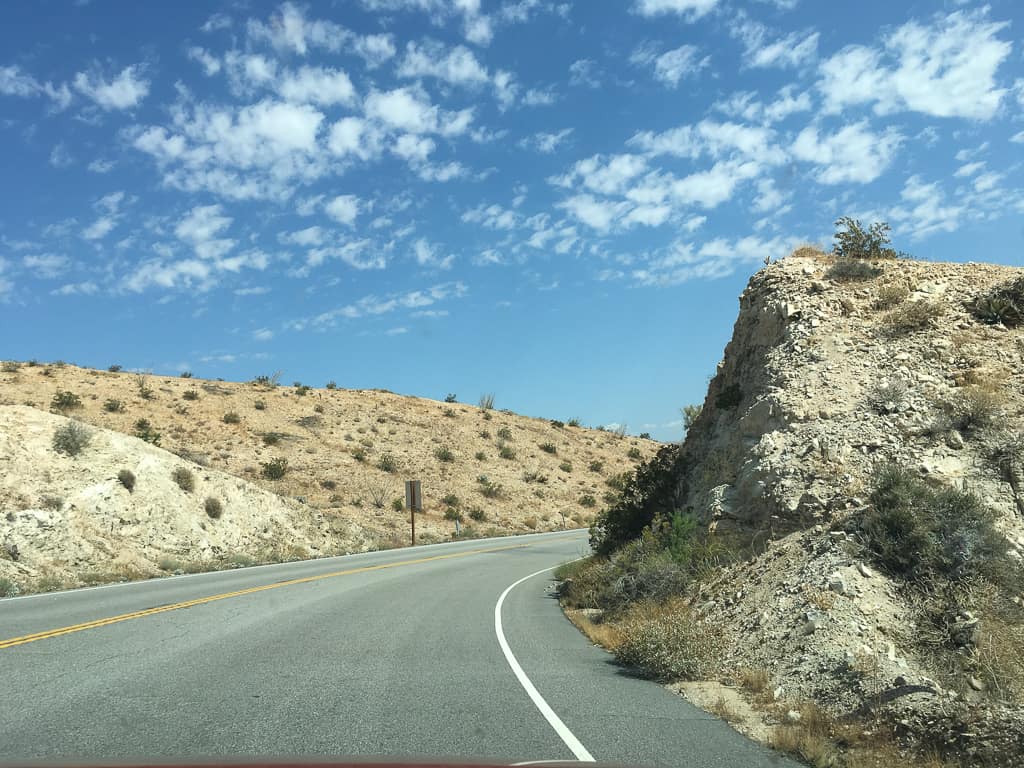 We stopped in Palm Desert for breakfast at Palm Greens Cafe, which has a delightful assortment of ceiling lanterns. I endorse the breakfast tacos. 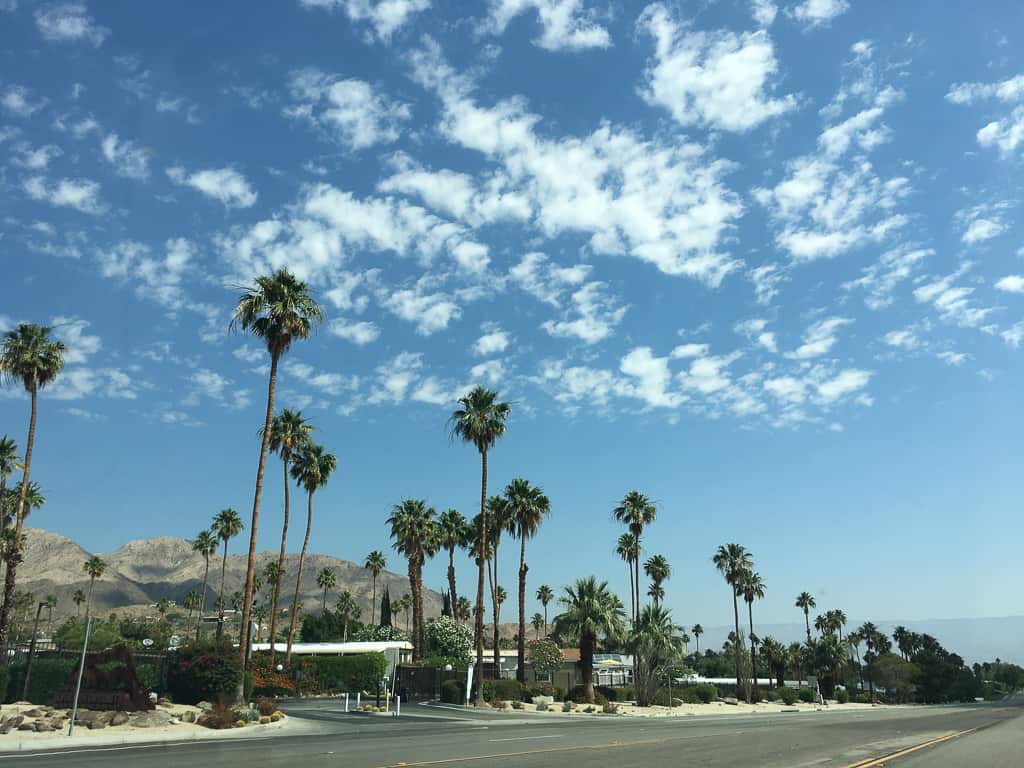 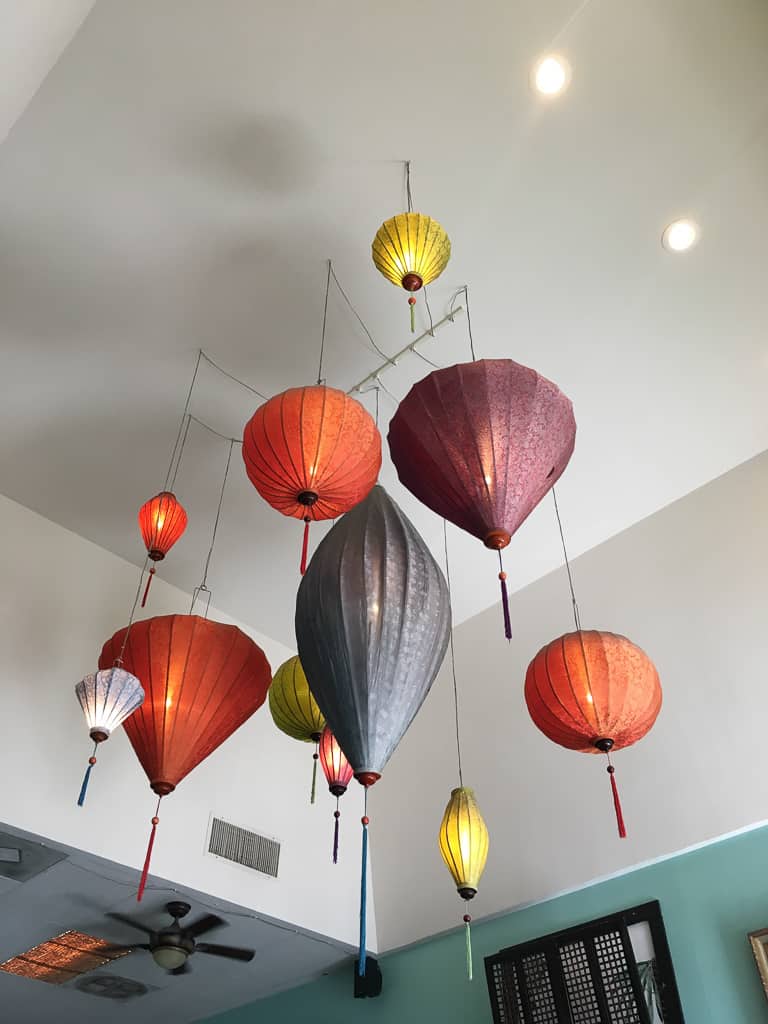 It was already approximately 300 degrees Celsius on the desert floor, so we inhaled our meal and skedaddled.

After paying a small parking fee, you leave your car in a designated lot at the bottom of the mountain and take a shuttle bus to the tram, where you purchase your tram tickets. 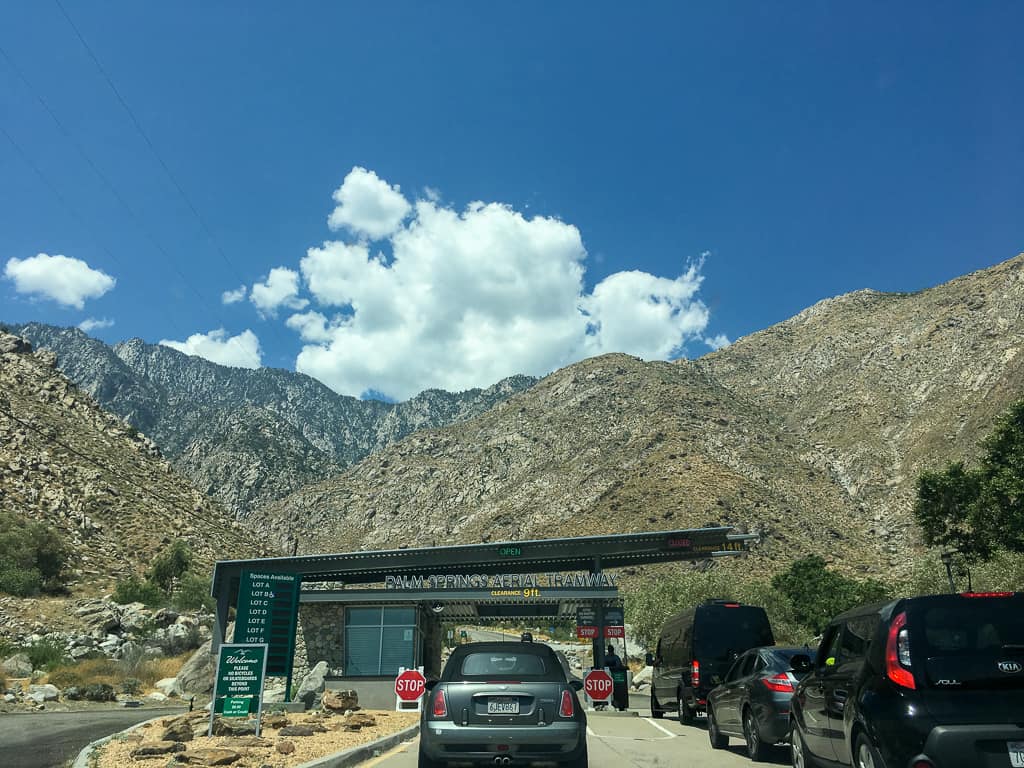 The tram is shaped like a curling stone with windows, and the floor rotates, so you get a 360° view of the canyon as you ascend and descend.

The view from the rotated tram pod as it ascends from the desert floor to 8,516 feet is incredible and worthwhile in and of itself. 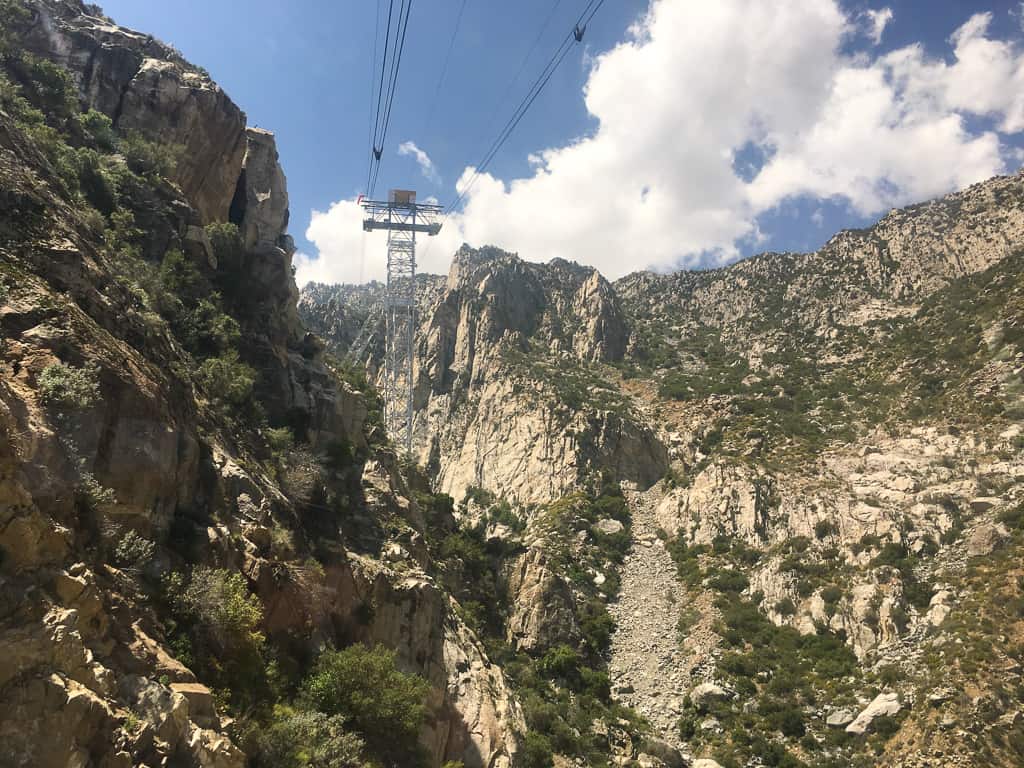 The park service runs a restaurant at the top, and you can dine and look out over the desert or the mountain. I recommend reservations if you want to dine on Saturday evening — we dragged ourselves in from the hike around 6:30pm, and the restaurant was completely booked. Fortunately, they serve the same menu at the bar, so we weren’t relegated to eating the cafeteria food. 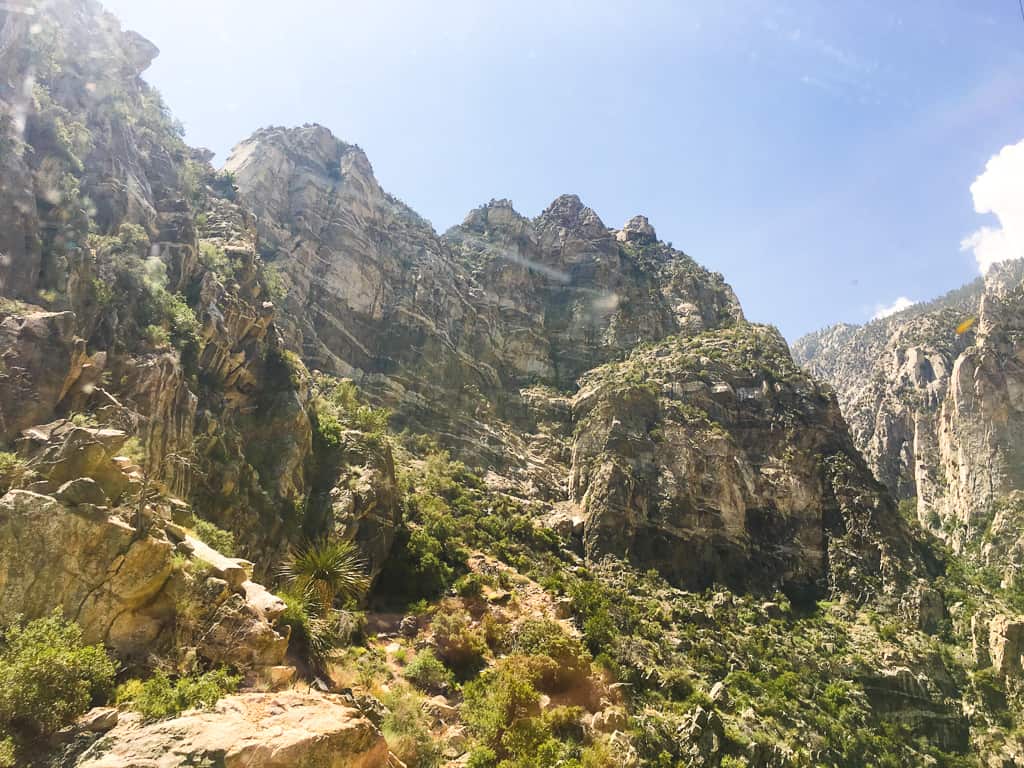 If you get the right tram operator on the evening return trip, he plays stadium rock and gets everyone singing as you whirl around. 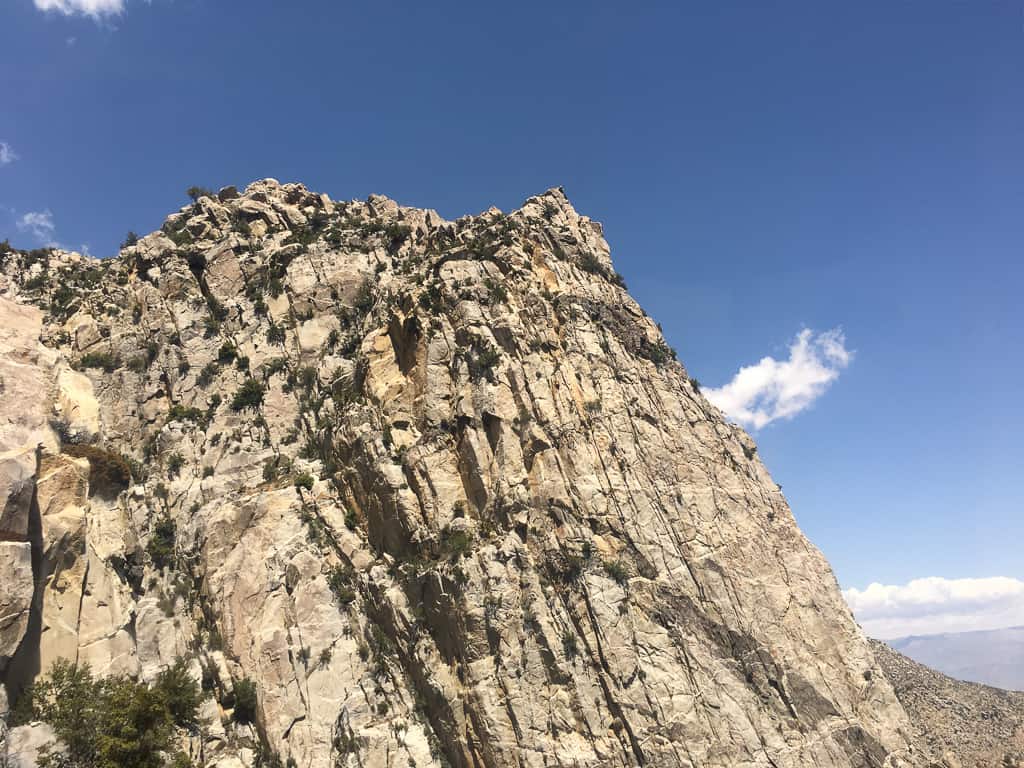 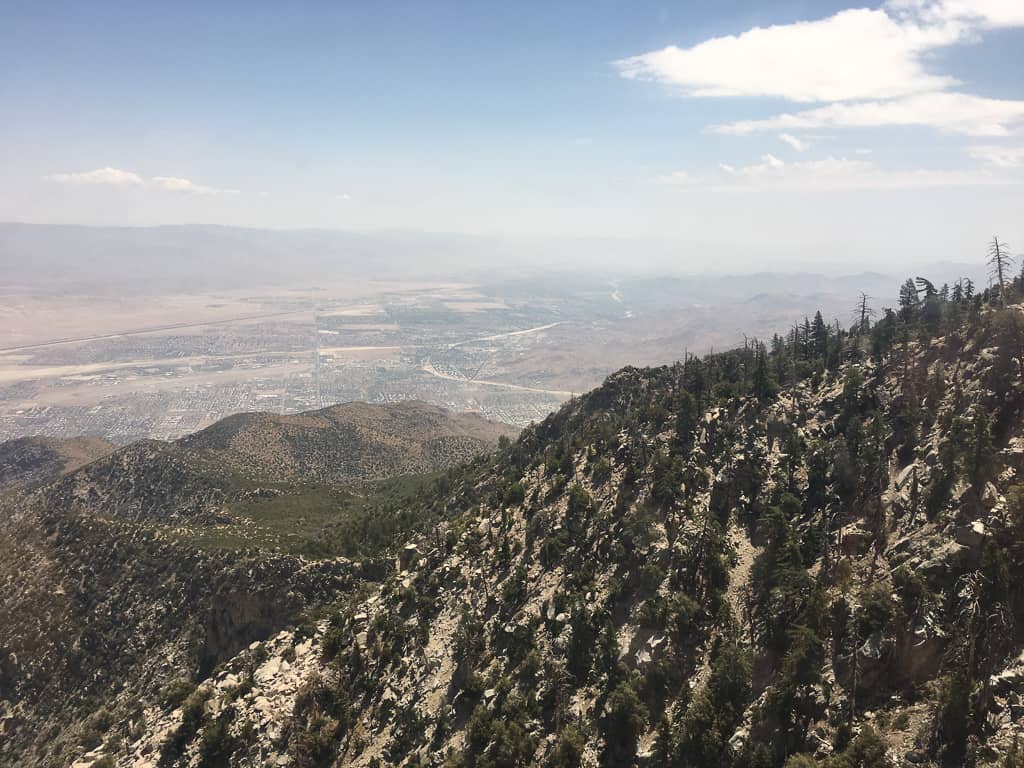 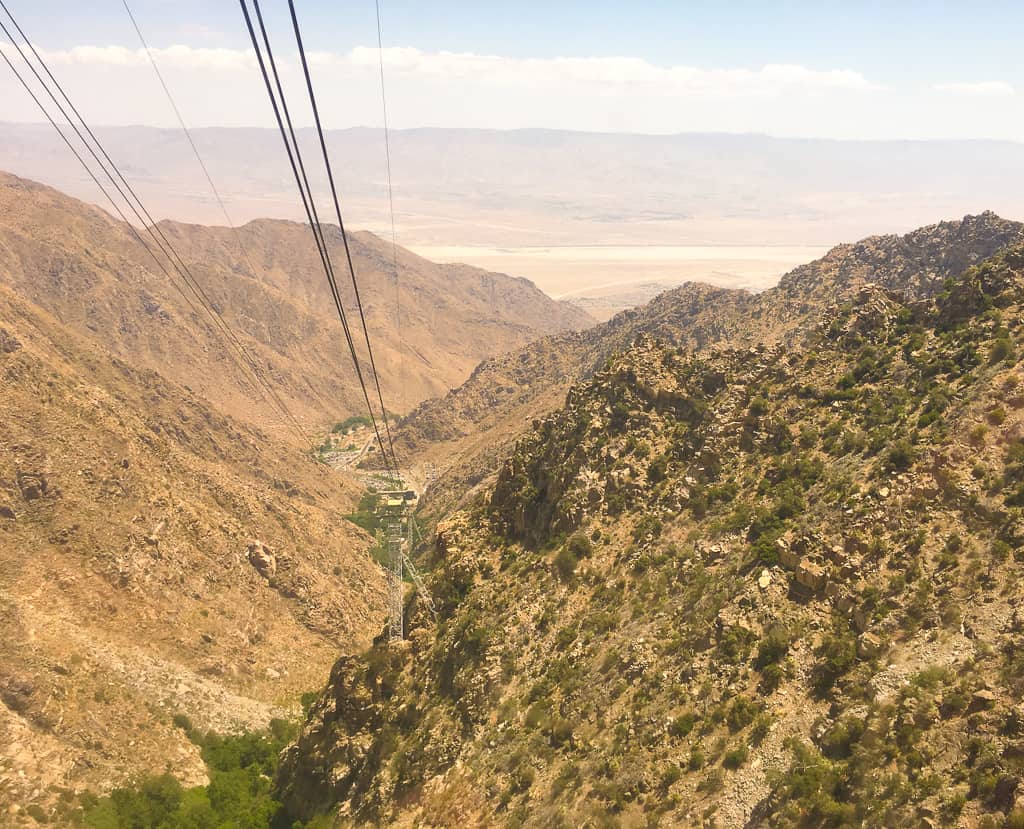 From the tram terminal / restaurant / gift shop, a wide concrete walk descends via switchbacks to the floor of the cup created by the mountains. It’s not super steep on the way down, but we used our poles to get back up it at the end of the day.

Before you head up the mountain, you’ll fill out a permit at the ranger station and take a copy with you, which you return as you pass back by the station on the way down. This lets the rangers know which idiot got themselves stranded on the mountain so they can come looking for you.

Once you get past the crowd of general visitors rambling about near the bottom, the ascent starts quickly and doesn’t let up. 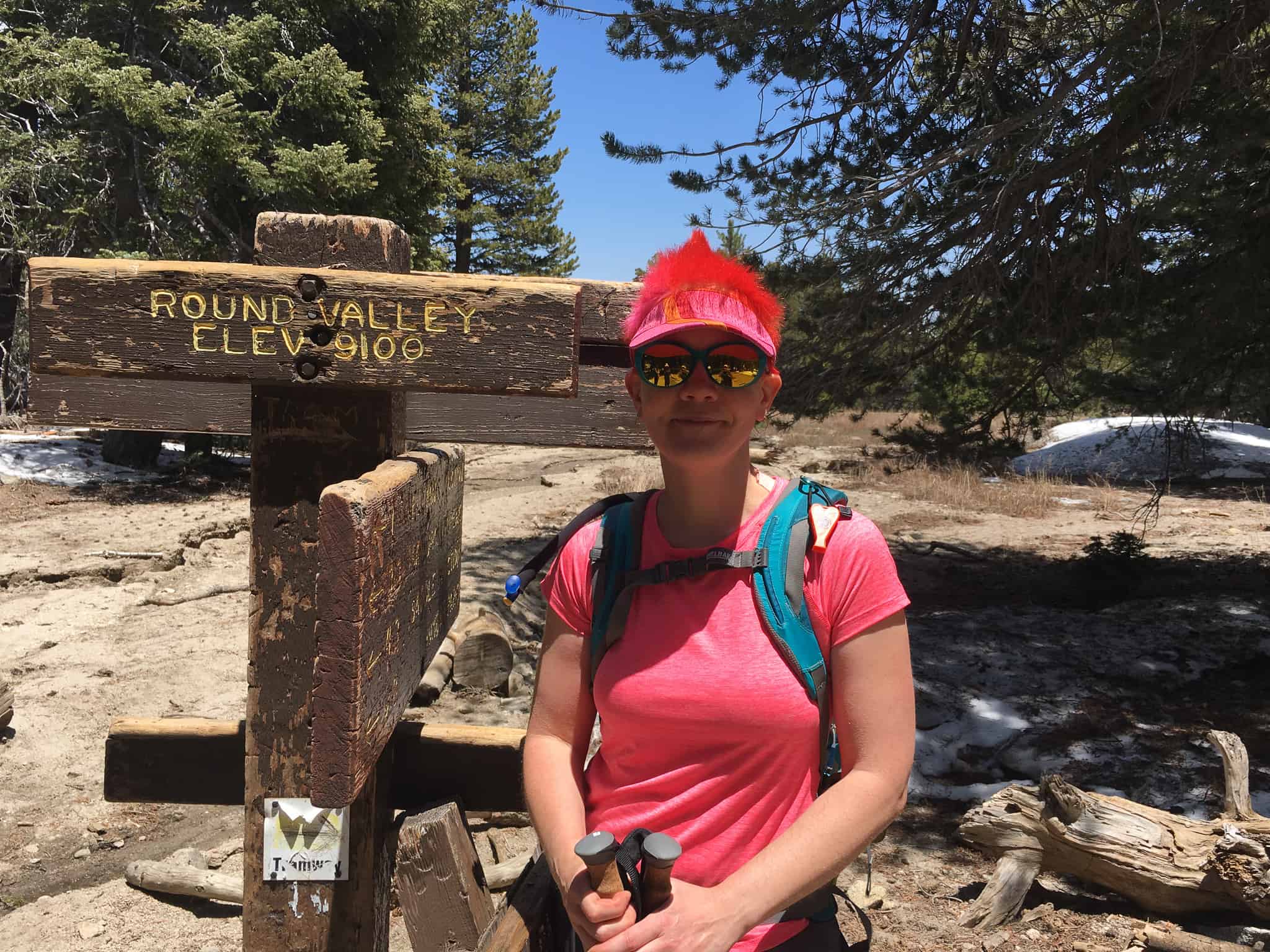 With the snowpack, the trail quickly disappears, and we were glad of the GPS to tell us which way to turn. The trail also migrates over time as new obstacles fall, so there are sections where you’re following someone else’s beaten path but are definitely not on the established GPS track. Roll with it, you’ll end up in the same place. 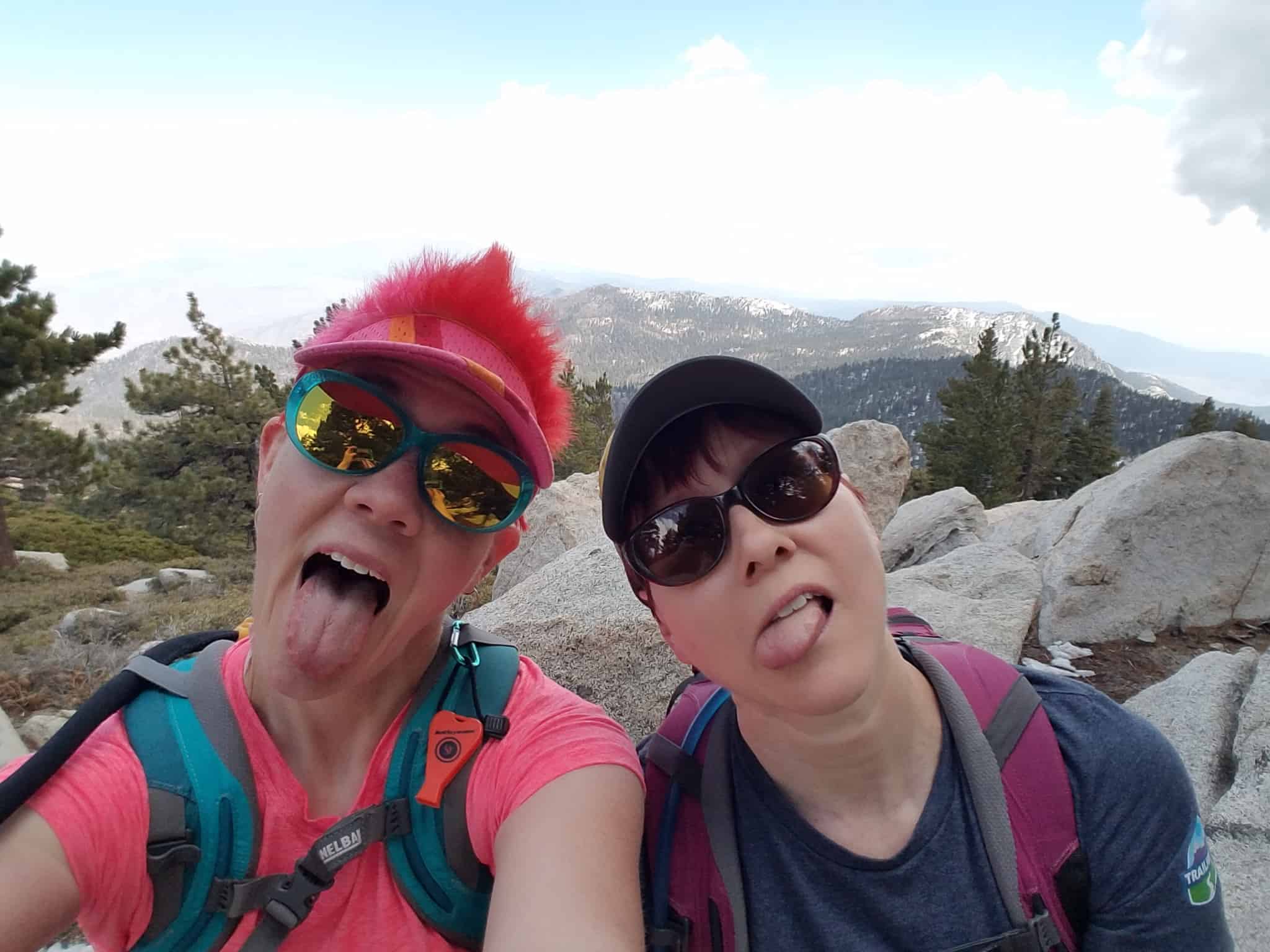 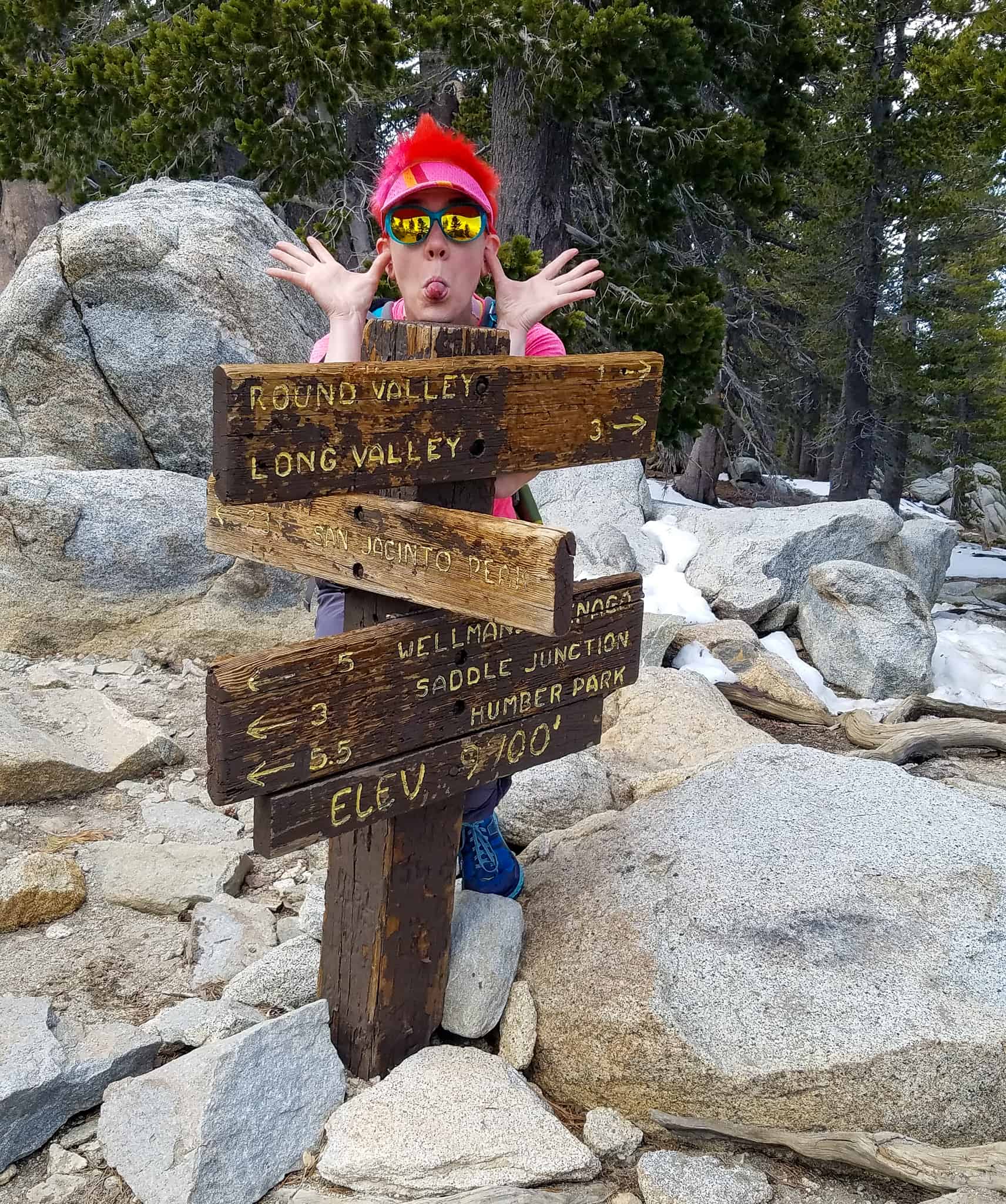 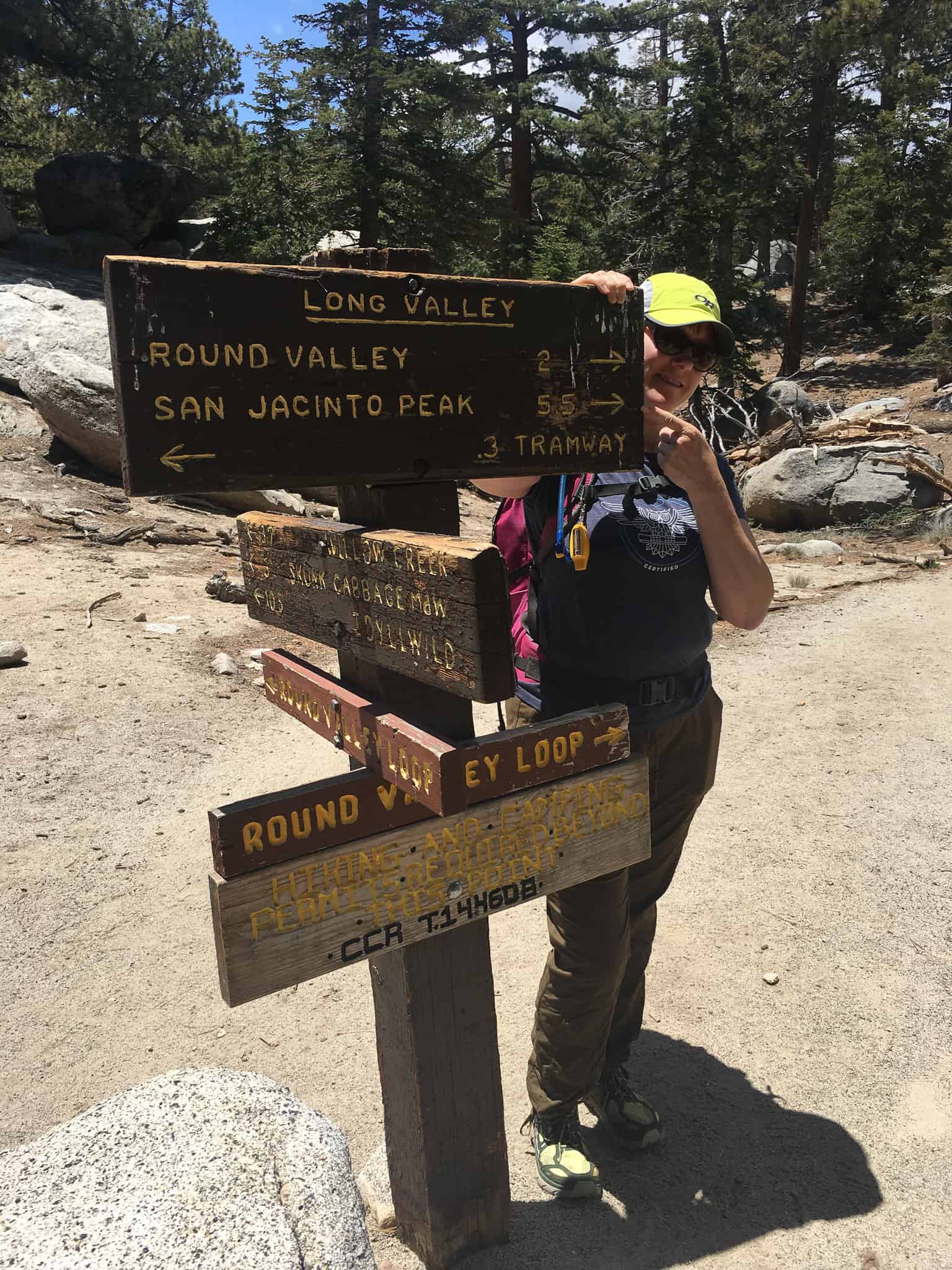 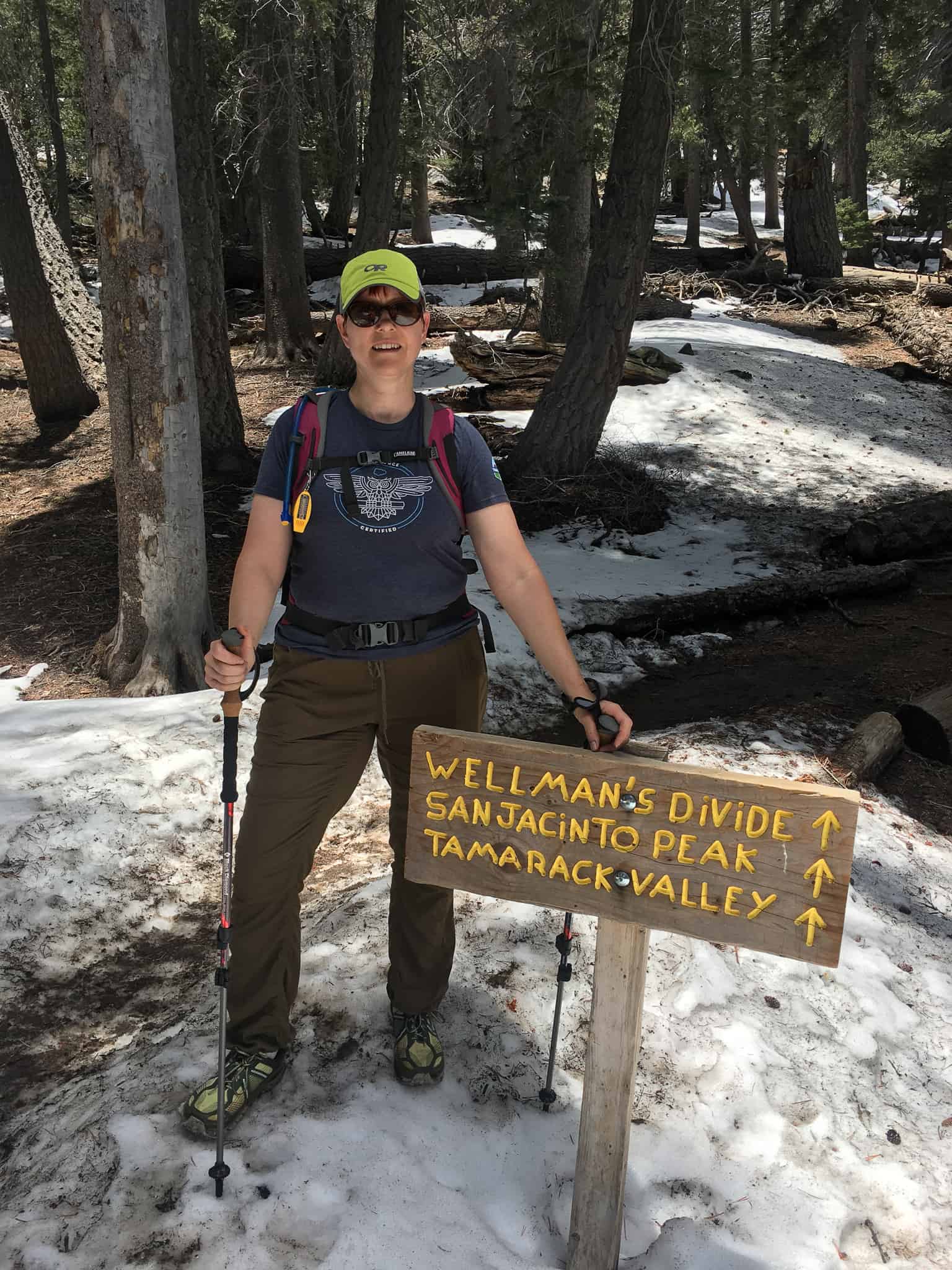 The trail is not long, but boy is it slow-going. We average 3 mph on Maryland trails, had been averaging 2 mph on mountainous California trails so far, but the slippery, icy trail on the upper half of this mountain reduced our speed noticeably, as you can see from the dip in the middle of speed graph above. 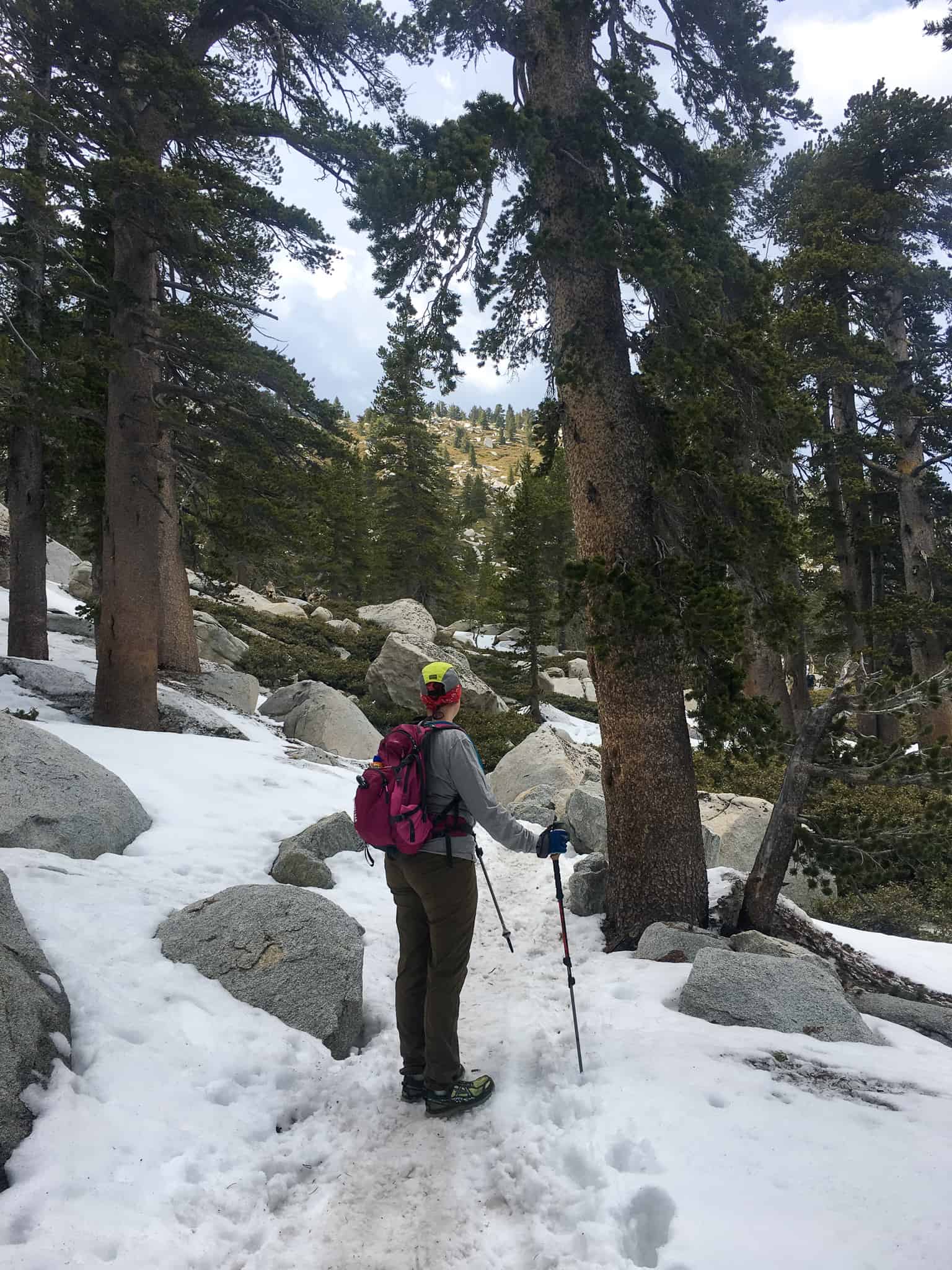 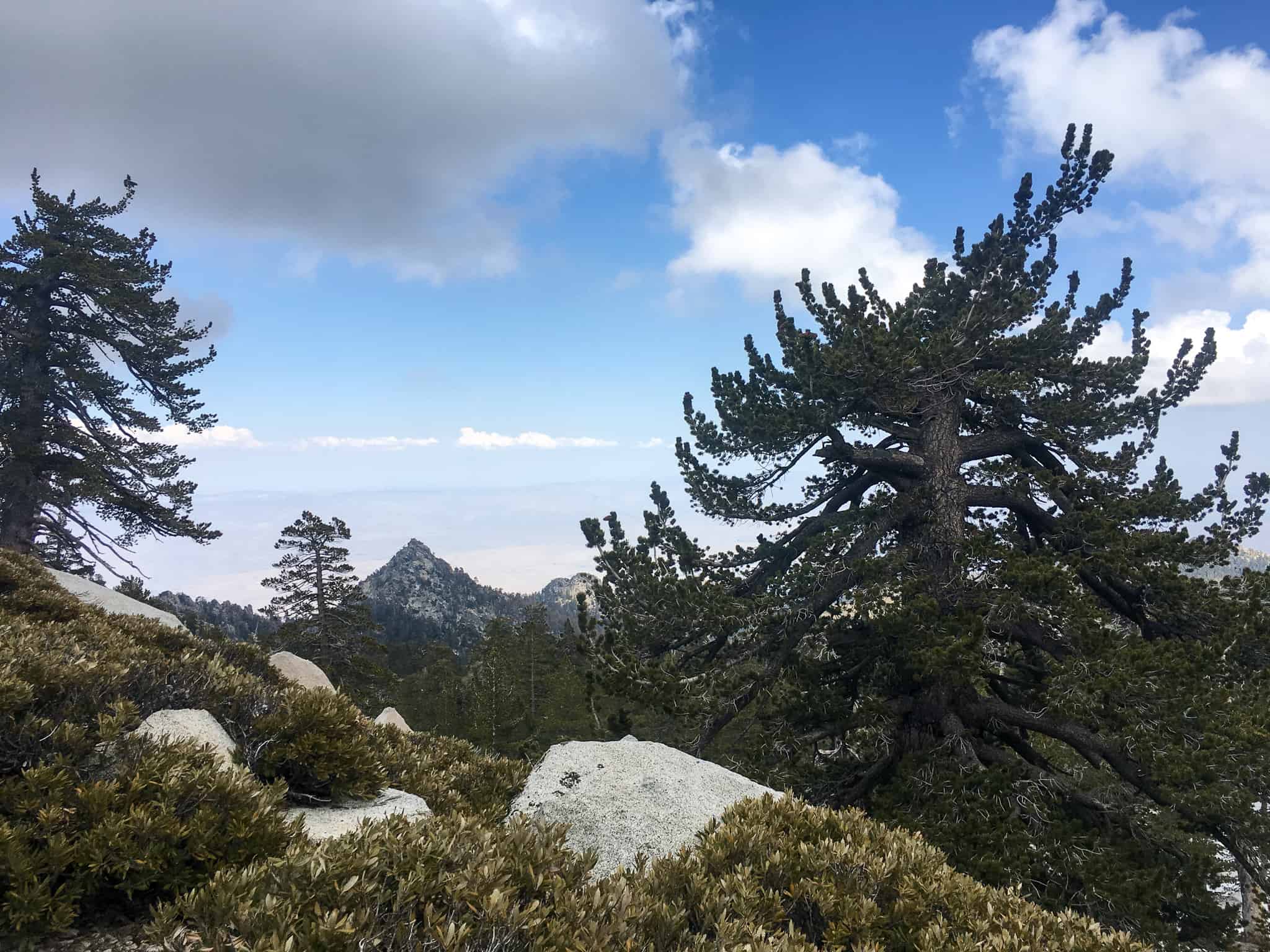 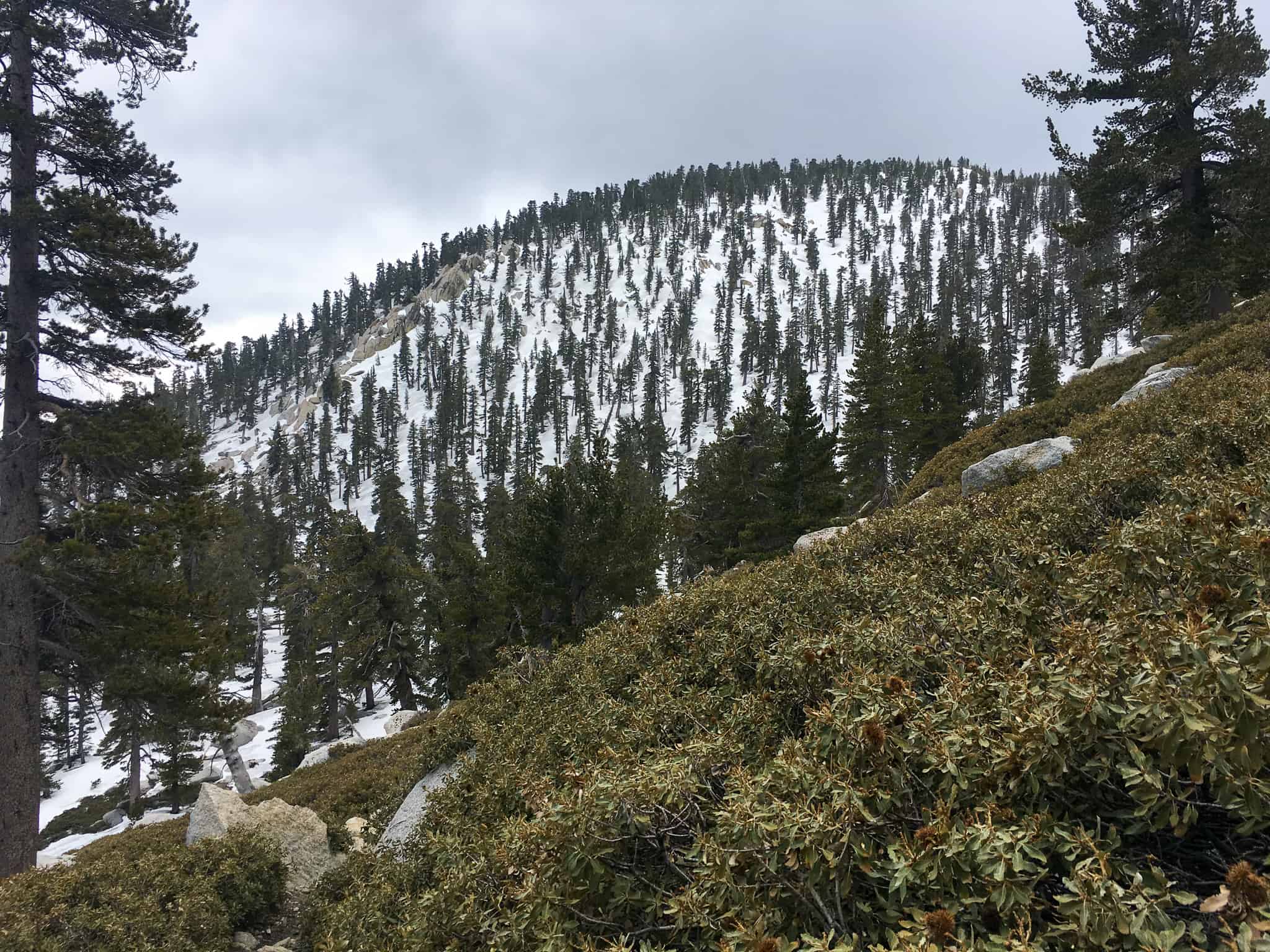 Around 9600 feet, we passed the highest point we’d been so far. Shortly thereafter, Dar started to feel poorly. After another 500 feet in elevation, she realized that she was experiencing altitude sickness, and with an eye on getting back to the bottom before dusk so we didn’t fall down the mountain, we turned around at 10119 feet, short of the peak.

There are latrines halfway down, though it feels like they are closer to the bottom when you’re on the return trip. Behind the ranger hut at Round Valley is also a private spot to pee. I mean, it could be. Allegedly.

Other than each of us sliding down a snowpack twice, the descent was uneventful. As we sped (relatively) down, we ran into other hikers suffering from altitude sickness who were waiting for their friends or descending slowly and unhappily.