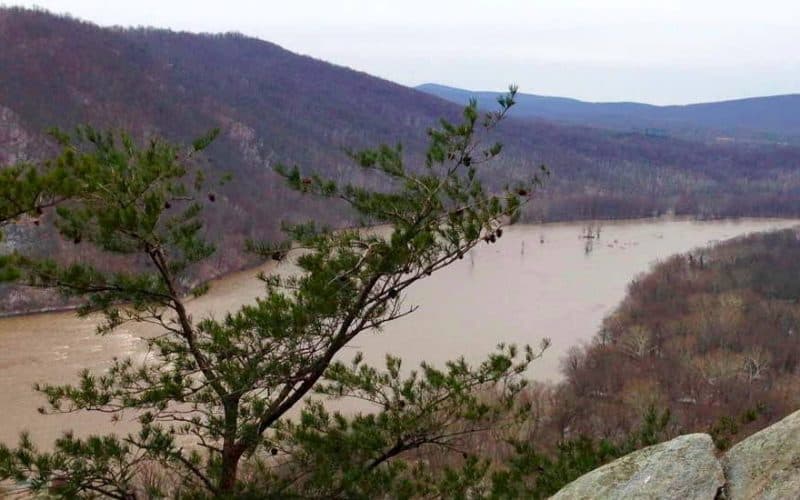 The 10.5-mile, mostly downhill hike from Gathland State Park south to historic Harpers Ferry is an easy day hike on the southern end of the Appalachian Trail in Maryland. This is a point-to-point hike, so you’ll need two cars — or a taxi — to pull it off. If you’re interested in hiking all 42 miles of the Appalachian Trail in Maryland in one day, check out the Maryland Challenge! I prefer to do it in 10-mile-ish segments.

You’ll start by dropping a car at the Amtrak Station — or in the limited on-street parking — in Harpers Ferry, then head north to Gathland. Amtrak permits hikers to use the station parking lot and the station’s clean, climate-controlled restrooms (so nice!). The park service will kindly leave a payment envelope on your car while you’re out. Your $10 payment entitles you to three days of parking lot use, and there’s a box to turn in the envelope next to the driveway.

Begin at the Arch

The most notable feature of Gathland is a giant stone arch. The bathrooms are closed in winter, but a port-a-potty is provided. Use it! Your next opportunity for concealed peeing is in 3.8 miles at the Ed Garvey shelter, after which you’ll be squatting behind a tree for the rest of the hike.

The photo op on this hike is five miles in at Weverton Cliffs, a rocky outcropping overlooking US 340, the Potomac, and Harpers Ferry. You’ll take a very short and well-signed spur trail off the AT to the top of the cliff. As I hung out near the outer edge taking photos, a helicopter came flying straight toward the outcropping, then banked away. I don’t know what we did, but apparently they’re onto us! This is also the halfway point, so if you brought lunch, it’s a scenic munching spot.

If you have angry knees, this is where you’ll anger them. After Weverton Cliffs, the trail descends 1000 feet to the Potomac, weaving back and forth across the face of the mountain to remain walkable.

When you get to the base of the mountain, the route winds around some backyards and under Route 340 to get to the path by the river. Keep a hawk eye out for signage so you stay on the trail.

The hike ends with a flat 3.5 miles into historic Harpers Ferry, walking on a path between the river and the railroad track. Along the way, there was an impressive icicle formation. Look closely at the photo above, and you’ll see a utility pole, with the power line cutting through the top of the photo. That icicle showcase is really tall! As you close in on Harpers Ferry, you’ll cross the Potomac on a train bridge (there’s a separate metal-enclosed walkway for humans) and walk through a small park. Be sure to look back after your shoulder before you cross the bridge to see the archway over the train tunnel! The train station is visible to the north after you cross the bridge.

Do this trail in reverse, from Harpers Ferry to the top of Weverton Cliffs, and you’ve done the hike known as Maryland Heights.

Harpers Ferry is a tourist town. Pickings are plentiful in the summer, slimmer in the winter. I’ve grabbed a quick bite at Mena’s Pizzeria in town, and I’ve stopped at Beans in the Belfry, an adorable coffee shop in an old church in nearby Brunswick. It’s not far out of your way as you head back up to Gathland State Park, and it’s open later than anything in Harpers Ferry in the winter. Other possibilities in Harpers Ferry include:

You can always hit the Starbucks on West Patrick Street in Frederick after you pick up the car you left at Gathland.

The weather forecast in Harper’s Ferry was 36 degrees. We figured it might be a little colder up on the AT, so I carried a light coat and wore knee-length tights under my usual paint-spattered sweats svelte technical hiking pants. It was more than a little colder — 26 degrees, plus a windchill at times — and there was still snow on the ground. I was glad for my coat and wished I’d worn a full-length under-layer. You’re walking on the ridge line of the Appalachians for several miles.