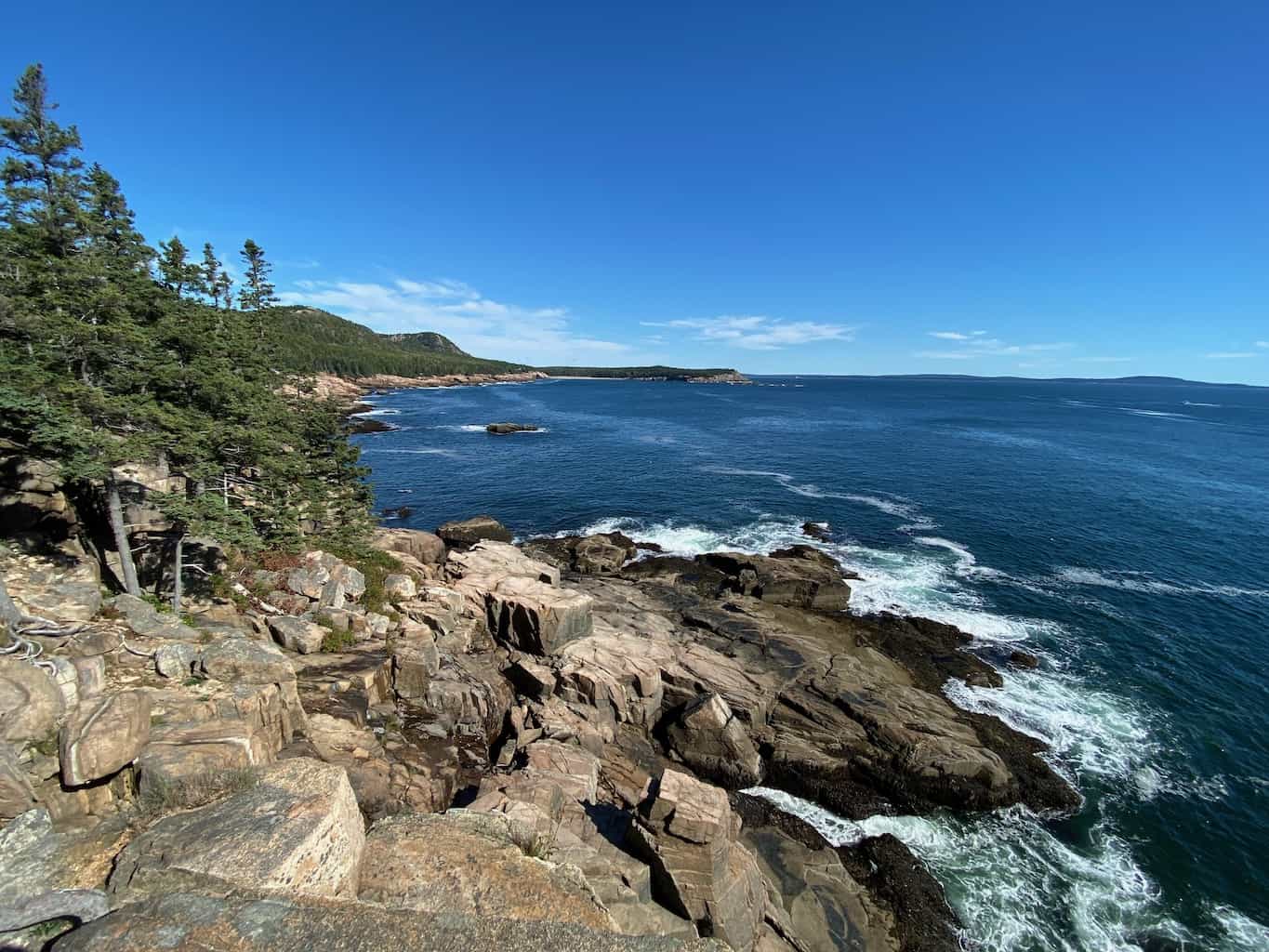 On our first day hiking in Acadia this time, we combined a few trails into a loop we’d seen mentioned in forums: park at Sand Beach, climb up the rungs and ladders of Beehive, down the back to the glacial lake called the Bowl. Instead of loop back around to the start, cut off on a connector trail to Gorham Mountain, which then descends to Park Loop Road along Ocean Path. Head south on Ocean Path all the way to its end at Otter Cove, then return to Sand Beach via the whole length of Ocean Path. I had to make a custom AllTrails route for this: Beehive-Bowl-Gorham Mountain-Ocean Path.

Spoiler: There are no otters.

Dar is allergic to heights, but we both found the terror of Beehive, with its metal rungs, ladders, exposed curves, and open floored crossings, to be over-hyped. It was fine. Upon conquering Beehive, Dar was suddenly excited to do Precipice!

Regardless of when you start, you’ll be part of a conga line going up Beehive. We arrived at 7:30am on a Monday in late September. The views are impressive.

O say can you see, by the dawn’s early light,
What so proudly we’ll climb as the sunlight is gleaming?

Dar is fabulous, and prepared to rock this. GET IT? ROCK THIS?

All the way up, you’ll be stopping to take photos of the view over Sand Beach.

The section where you have to walk over iron bars above an open gap is not as bad as it’s made out to be in the media (dang Youtubers).

And then you get to climb the rungs!

Dar considered levitating up but decided it would be too showy and used the rungs like the rest of us.

Whereupon she surveyed her domain.

The trail is narrow in spots with a sheer drop off.

But no match for Dar.

The top gets crowded as everyone basks in their accomplishments.

First summit of the week!

After cresting, the trail gently descends to the Bowl, a small glacial lake.

After the Bowl, the trail heads back around Beehive toward Sand Beach. You can conga this way with the rest of the line, or you can shed some of your new comrades by turning right onto the Gorham Mountain trail. There are still plenty of people on this trail and nowhere to hide to pee.

As you walk south from Beehive, you’ll have many opportunities to look back from bare granite spots at the people climbing Beehive.

Have you hugged a cairn today?

Second summit of the week!

From the Gorham ridge, you can see Otter Point.

When you get to the Gorman Mountain parking lot, hang a left down a short driveway and cross Park Loop Road to get onto Ocean Path, a dirt trail that runs roughly parallel to Park Loop Road along the shore. There are beautiful ocean views and rocky shores, and hordes of people since you can drive right up to the trail and it’s very flat. Bathrooms at Thunder Hole!

There is a woody section, but the forest is too close to the road to pee even if you do find yourself without other walkers.

Did I say it was flat? It’s mostly flat.

By the time we got back to the car, we’d had it with the gravel sidewalk and teaming masses. Fortunately, by arriving early, we’d secured a shady space in a smaller parking lot and had a delightful lunch sitting in the trunk of my hatchback, swinging our legs in the breeze.

Beauteous glass vessels and jewelry, handmade with love by yours truly, at Jellybug Artworks!