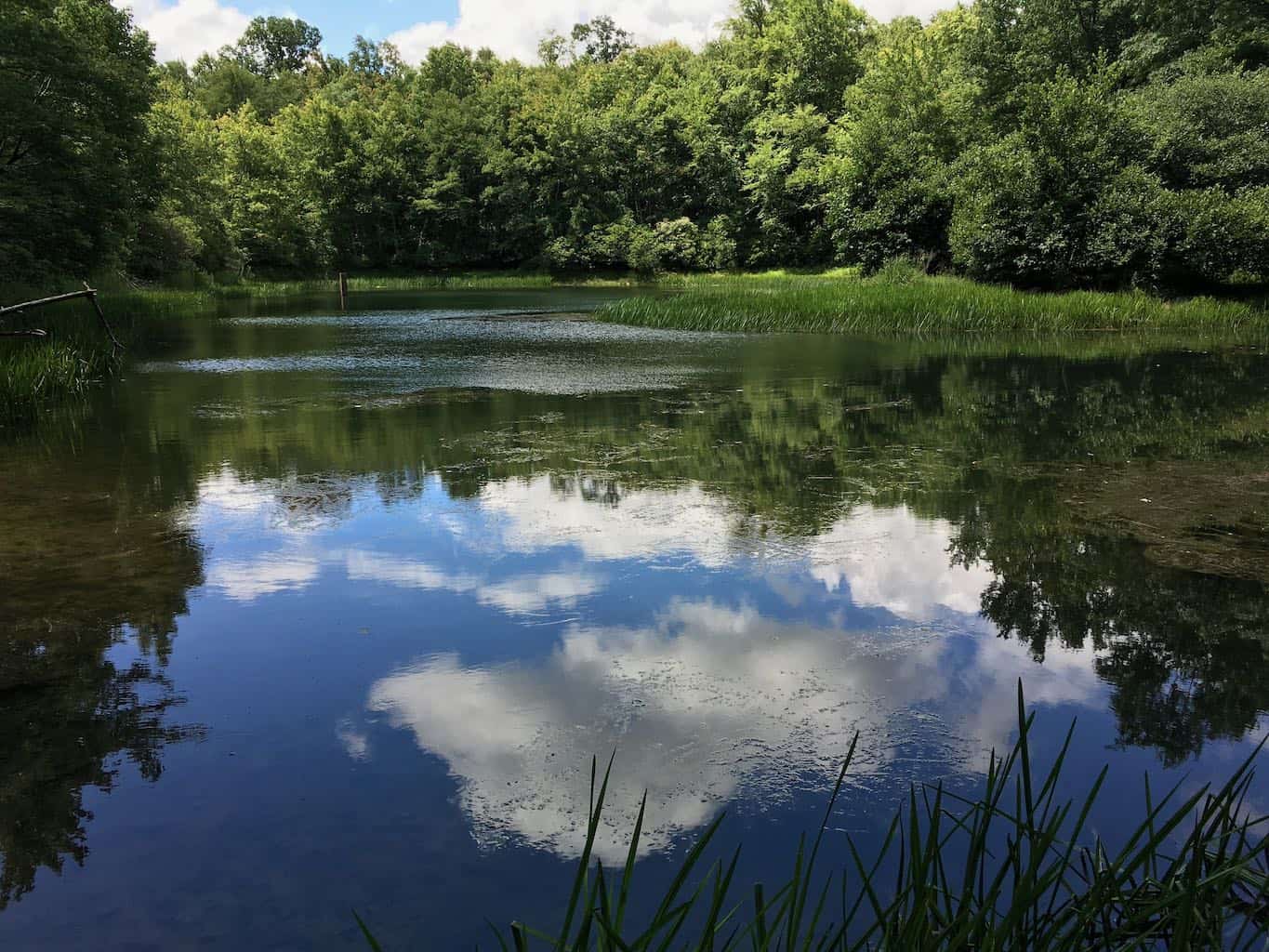 We first hiked the 9 Ponds Loop on January 18th, Our Second Year of the Pandemic (2021). It was so nice that we hiked it again on March 7th. It took us four months to get back again to see it in the non-winter, but we made up for the dreadful lassitude by adding on some extra mileage (to our detriment, as we both pooped out 9 miles into what become an 11-mile hike, despite being svelter and in better shape than last time).

So, we’ve only seen this trail in winter. WHAT WILL SUMMER’S RIOT OF VEGETATION REVEAL? Will we even recognize the place? (Spoiler: Yes. The ponds are still there. Kind of. Mostly. Are we having a drought?)

To our surprise and delight, the parking lot was nearly empty, and we effectively had the trail to ourselves. Other hikers were few, far between, and just as surprised to see us as we were to see them. Happily, all the pandemic hikers who choked the trails and parking lots when they couldn’t … do whatever it is they do on weekends … appear to have returned to doing whatever it is they do on weekends.

We always hike this trail counter clockwise to challenge ourselves up the big hill by the pond that’s after White Rock.

The previously-barren entrance is now exploding with volunteer foliage.

You pass through a field of wildflowers.

The first pond is .. um .. a meadow. The stream that you ford to go around it is just a couple feet wide now.

The fern posse was out in force, dominating large portions of the trail with frondage. Fortunately, they are friendly to hikers.

In other areas, sassafras and other stubby-fingered bushes forms the underlayer.

Some of the ponds are not desiccated fields.

We had the White Rock Overlook to ourselves. If you need to pee, there’s a nice nook to the left of it where you can go over the ridge line and down into a little cup where you’re hidden from the trail.

Since White Rock is a Top of the World, I had to surf it.

Past White Rock, there is a large pond on the right, followed by a steepish hill. Except that the pond was a small pond (all that grass was underwater in the winer!) and the steepish hill seemed to have evaporated. Possibly we are in better shape.

Following the evaporated steepish hill, a spur trail takes off to the left to visit two optional ponds. They were also nice and full.

The second spur pond has lots of dead tree trunks sticking out of it. The breeze made nice ripples.

When we were here in the winter, we considered crossing the stream that flows out of this pond, but the logs tossed across it were quite icy, and neither of us wanted to be wet on day when we were hiking in spikes due to snow and ice.

Not so in July! The low water level also exposed some stepping stones, so the logs weren’t even necessary.

On our extra bonus trail extension, we found this lovely abode.

I picked up a bootonniere.

There are nice rock outcroppings. This one had a cute little fern growing out of a crevice on the back.

Somewhere after Fern Valley, we both bonked. It’s been a while since we hiked this far.

Another half-empty pond. Dar stood on the ice on this pond in March. In the same spot, she would have been just standing on the bank.

See my current gear, clothing, and thoughts about it on the Hiking Gear page.