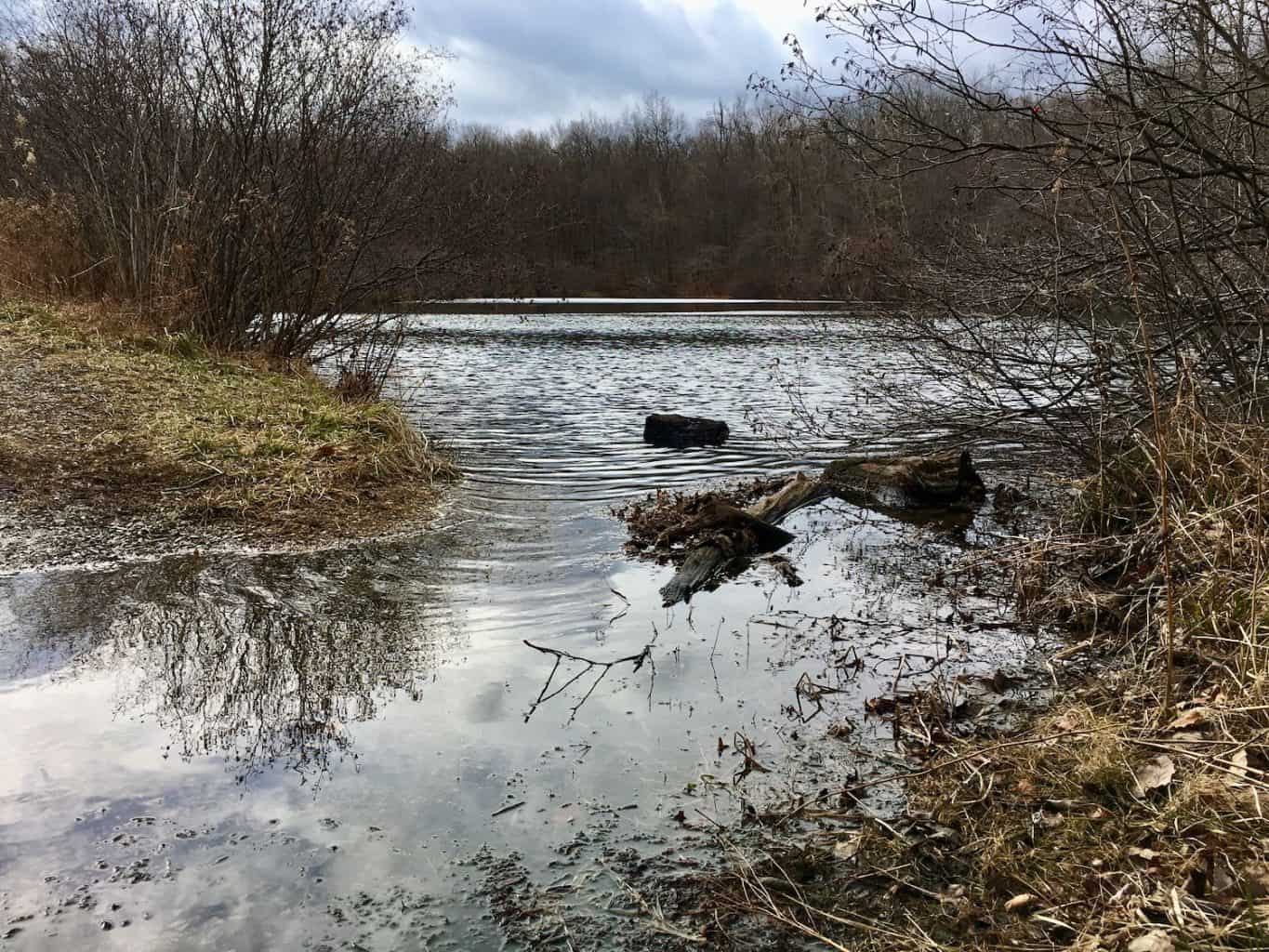 9 Ponds Loop is mostly a thoroughly delightful trail — soft ground, not too muddy in mud season, not too hilly. Some sections are rocky, but not Appalachian-Trail-in-Maryland rocky. There are spots where the mountain bikers have turned the trail to a mud pit, but not to nearly the extreme that you see in, say, Patapsco State Park, where you really need waders in the winter.

We rolled up around 10am on a weekday holiday-for-some, and the lot marked as the trailhead was full, so we kept driving and parked in the next parkable lot. All the nearby lots are on the loop, it seems, so you just need to get in the general vicinity. If everything on Gambrill Park Road is full, we walked by two additional empty parking lots here and here. They’re still on the loop, just starting in a different place.

After coming in at 9 miles, with an advertised distance of 10.7 miles, we suspiciously checked some other people’s recordings, and this is definitely not a 10.7 mile trail. Maybe 9.5 if you take all the optional spurs, which we skipped, because we were afraid that we weren’t going to complete 10.7 miles before dark. I was a totally pondarazzi for the first few ponds, then curtailed my picture-taking after we assessed our speed and decided we had to hoof it. Which we didn’t. Because it’s not a 10.7-mile trail.

On a day with dramatic clouds, like today, the reflections of the sky in the ponds are fantastic. The ponds were in various stages of iced-over, and the day could not decide whether to be overcast or sunny.

The biggest letdown on the block
Was the spur to Salamander Rock
While the other spurs went to White Rock
We were hopping and bopping to .. an electric substation.

Not far from the start, we excitedly (and with much huffing … don’t hike uphill when you’ve been calorie-restricting, okay? PSA.) took a spur trail to Salamander Rock. Which is the ruins of a stone house, and an electric substation. Not worth climbing a hill for.

Moving along from the crushing disappointment of Salamander “Rock”, you get some mini-Catoctin rock outcroppings to scale.

In the middle of a very rocky section of trail, bordered closely on both sides by laurel bushes, we find this very relevant sign.

Not long after, as we were scaling an infinitely long hill, it began to SNOW IN EARNEST. Under normal snow circumstances, this would have been very unpleasant, as all the landing flakes would have made their way down the backs of necks, melted and rendered us cold and wet.

But no … this was Magical Frederick Mountain Snow. MFMS is large, ball-like, dry, soft, and non-melty. It was like being in a styrofoam storm. But without static cling.

Here we are, hiking as fast as possible to evade sundown on our not-actually-10.7-miles-thanks-AllTrails, and I am standing still, taking pictures of my hoodie, unable to process the novelty of the MFMS.

A family of noisy, fast, unmasked walkers was tailing us at this point, so I caught a quick pond shot, barely stopping long enough to let the camera focus.

Rather than taking a road segment back to our car, we went for the “fire road”, which is .. a nice grassy area that you would not mistake for a fire road, and I was able to squeeze in one last good pond.

Totally going back in other seasons.

Beauteous glass vessels and jewelry, handmade with love by yours truly, at Jellybug Artworks!