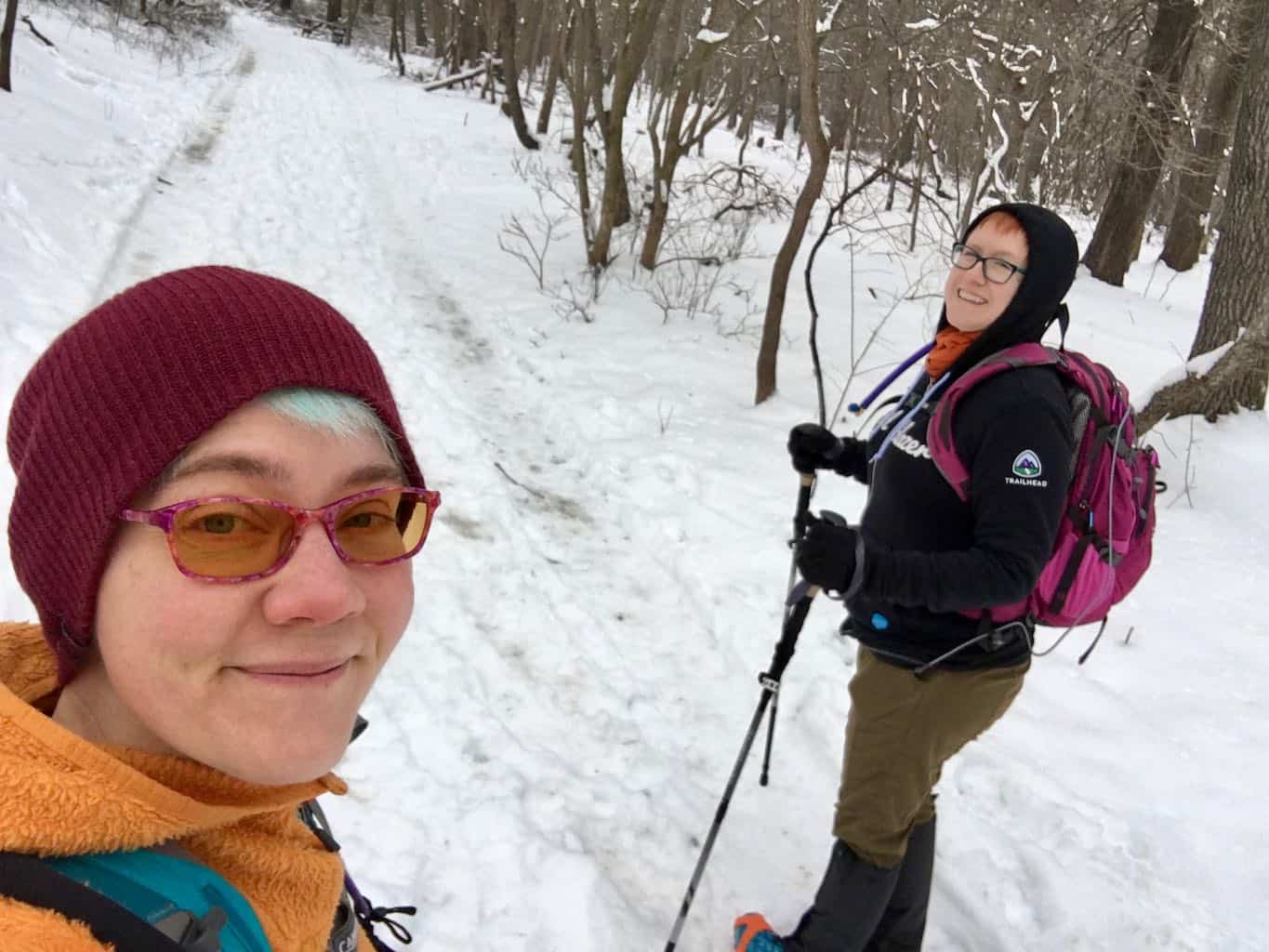 If you, like me, assumed that a choate mine is a mine from which one extracts choate, we would be in the best of company, yet wrong despite our strength in numbers. It’s not even cho’ate, a contraction of “chromate”, which was extracted from said mine.

Nay, fellow word lover, a Choate mine is a mine owned partially by a family whose surname is Choate, in partnership with the Tyson family, who owned a number of mines in the area. Maryland’s Choate, Chromite Mine, 1830-1920, by Johnny Johnsson provides a lengthy history of the mine, complete with photos from inside, from a local mine enthusiast. You can peer down into the mine, a short distance from the trail head. It’s very icicley in winter. Icicley is definitely a word. Iciclesome? Iciclatious? Festooned with icicles?

Soldiers Delight? What is this name?

I was driving, so I dispatched Dar to research the origins of the name. Ten minutes later, she announced that the discovered-in-the-UK COVID-19 variant is 50% more deadly than the original. “Did you try to look up Soldiers Delight and get distracted by COVID headlines?” I inquired, in the least judgmental voice. “… Maybe,” she admitted, unrepentant.

Wikipedia purports that British soldiers who patrolled the area gave it this name, but as an official Barrens (of serpentine rock, no less), and given that colonial soldiers seemed to, on balance, delight more in liquor and women, I find this explanation suspect. The Washington Post reports:

According to biologist and local history buff Elmer Worthley, Soldiers Delight got its name from one of several possible sources. “Some say it goes back to colonial times when soldiers patrolling against Indians found it scenically delightful,” he said. “Some say that during the Civil War the ladies of [nearby] Owings Mills brought ice cream to troops resting there. And some say the name is a corruption of the name Siler, a family that once owned the land. Take your pick.”

Speaking of words, on the way to the Soldiers Delight Natural Environmental Area, we drove past an auto shop called Smoot’s Collision Center, and spent the rest of the drive inventing a flotilla of rhyming businesses Smoot should be running as part of the Smoot empire.

This trail on this day was chosen, I admit, purely for its proximity to warm homes in case we wanted to bail.

We had tried to repeat 9 Ponds Loop the previous weekend. It had snowed, but at our latitude, it had melted, and we expected a gross, muddy trail. But no, Frederick is a different climate. The parking had three spaces that didn’t have a foot of snow in them, the trail was a mixture of snow and large icy patches from previous hikers and meltings and re-freezings, and the surrounding forest had several inches of snow.

Clad as we were in our non-waterproof hiking shoes and pants, we would have been soaking, freezing, and probably moving very slowly as we slid all over the place. So we took a leisurely drive north into Catoctin to look at the pretty scenery, eyed another trail which was also covered in white stuff, eyed the hikers putting on spikes and trax, and went home. Well, we tried to go home. Dar’s car really wanted to go south for the winter and kept getting off on the wrong exits, but we eventually returned, and then set about ordering ourselves winter hiking garb. Waterproof shoes, waterproof gaiters, micro-spikes.

I was VERY EXCITED to go hiking once the gear arrived, so I harassed Dar with hourly updates on which weekend day had the drier forecast until she consented to go out if the ice on the roads wasn’t too bad. Being a city street parker, she had to chip her car out of a solid block of ice.

I wanted to go back to 9 Ponds and tromp about in the snow like a clawed, indestructible beast, possibly making roaring noises, but she pragmatically suggested we go somewhere close in case our new feet were still not properly outfitted. So, Soldiers Delight. 5 miles of relatively even terrain, with a snow and ice challenge, and since we didn’t have to drive upwards of an hour to get there, I was able to lure her to Harbor Freight to help me schlepp home a sandblasting cabinet.

A short journey west on 795 from the Baltimore beltway, the trailhead is a parking lot on Deer Park Road. It is ample, at least on a 29-degree January day, overcast, with snow and ice still on the ground. While still teeming with little ice hummocks, the lot was plowed, which is more than could be said for the 9 Ponds Loop parking lot in the Frederick State Forest last weekend.

Sliding a bit as I got out of the car to don my spikes, I was already happy to have them.

The trail is butterfly shaped, with roughly half on each side of the road. Setting off from the parking lot, we headed up a snowy, icy path. CRONCH CRONCH CRONCH. Walking in spikes on snow and ice is very loud, but VERY SATISFYING. I did indeed feel like a powerful, clawed beast, and I think I deserve some recognition for the self-control I displayed in not roaring at anyone.

The Kahtoola microspikes (red, on the left below) are FANTASTIC. The fact that they come up comparatively high around your shoe and have textured rubber makes them extra grippy, and the rubber is thick and strong. I have to use two hands to pull on the backs to get them over my heels. The band that hugs the top perimeter of your foot is the only rubber portion — the rest is metal.

The cheap, generic cleats (orange, on the right below) are terrible. The whole harness is rubber, even under the feet. The harness has what resemble small metal bottle caps poking out of the bottom. The whole thing rotates around the foot as one walks, seemingly striving to have the tractiony portion facing the sky, necessitating frequent relocation. Finally, one of the rubber bands broke near the end of the trail, snapping clean in two.

That’s not say that cheap, generic hiking equipment is always bad. We both have cheap, generic waterproof nylon gaiters. Name brand ones are significantly more expensive, for seemingly little additional benefit. We both now use cheap, generic collapsible trekking poles that are every bit as sturdy as our $130 Black Diamond trekking poles, but cost much less and fit inside our daypacks and any size luggage.

You start through a brief burst of forest, then emerge into a field. It was here that Dar’s brain confirmed her suspicion that she had hiked this trail before — in high summer, in this unshaded area, broiling.

The meadow sidles up to some sort of religious building, but the trail bounces off the side of the parking lot and angles back away. The trees are lovely covered in snow.

And back out into meadow again. It very strongly resembled the beach, with grass growing out of sand.

There was a gait mandate.

I enjoyed the contrast of the white snow against the warm gold grass against the dark trees.

The path got quite icy as it wandered across The Barrens. Is this a river of water, or a river of footsteps?

The heavy snow weighed down the pine branches. It was just barely above freezing, and snow was constantly sliding off boughs and crashing around us. It felt like we were stuck in Inception, a world was crumbling around us, and we were desperately trying to stay alive until the kick.

Dar thought they made a nice frame, which is a much less foreboding interpretation.

A fourth voice joins the color opera: the richer brown of dead leaves.

Back in the meadow again. Astonishingly lovely in the snow.

This section of trail has the serpentine rock for which the trail is named jutting up out of it. Without scale, this could be a snow-covered mountain range and valley full of boulders.

I like it here. Do we have to go home?

Crossing the beach — I mean power line right of way — a second time. What are those mechanical giants on the horizon?! Run!

Sadly, the only colorful part of my waterproof hiking shoes is the sole.

Not far from the parking lot, you can peer into old mine shafts full of water (and icicles!).

Where veins of choate shiiiiinnnne!

The Seven Dwarves of Owings Mills

I managed not to hit the record button until we’d been walking for a bit.