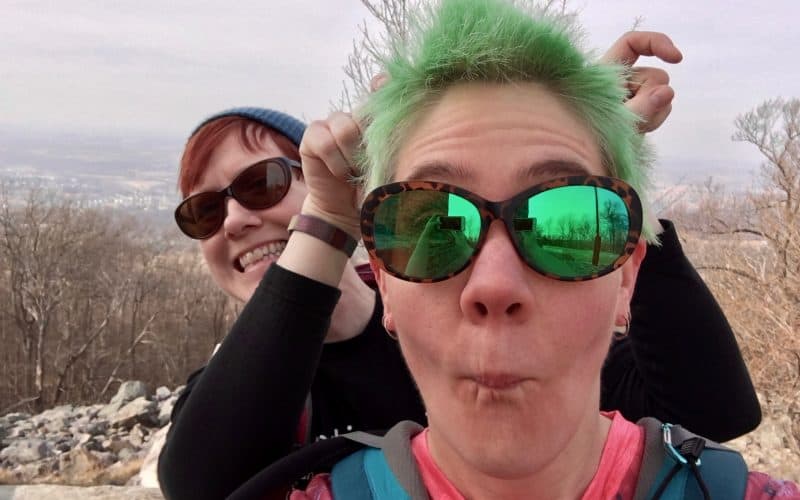 No, not the pointy one in DC. Out on the Appalachian Trail in Boonsboro, there is a short squatty one made of stones. In an attempt not to hike from Gathland State Park to Harpers Ferry AGAIN because (a) that would be time number 5 or 6, (b) our knees don’t like the descent from Weverton Cliff and (c) my hips really don’t like the 17-mile flat stretch along the river to get from the mountains back to Harpers Ferry, we hiked from Fox’s Gap to Washington Milk Bottle Monument. Neither of us had done much in the way of hills anything since May’s traipse through the San Jacinto Wilderness, and the ups on this moderate trail sadly kicked our butts.

There is a dirt parking lot at Fox’s Gap. If you accidentally head south on the well-signed trail, you’ll find yourself at a Confederate war memorial. Whoops! Turn around and go back, you want the AT entrance on the OTHER side of the street.

Near Fox’s Gap, you’ll find Dahlgren Campground for backpackers, with toilets, picnic benches and a raccoon pole. What’s a raccoon pole? Well, it’s like a bear pole, but shorter. A bear would just snack on anything you hung on it. Frankly I’m pretty sure it’s not raccoon-proof either, as I’ve seen three of them stand on either other’s shoulders in my background to form a tower that would rival a circus performance so they could reach a bird feeder. The toilet building is closed in winter, but the state kindly provides a clean portapotty.

In the Washington Monument parking lot, I found the closest thing I’m going to experience to a white Christmas this year … a pile of leftover snow.

Dar was also attracted to the pile of leftover snow.

The milk bottle monument looks out over a scenic something-or-other.

I wore a short-sleeved tee, a long-sleeved tee, a dense fleece hoodie, gloves, and ear bags. With the variation in sun and exertion, sometimes I wore all of those things, and I sometimes I was down to the two tee shirts with my sleeves pushed up. The high was around 50 degrees when we reached the monument.

Parking at Fox’s Gap is free.