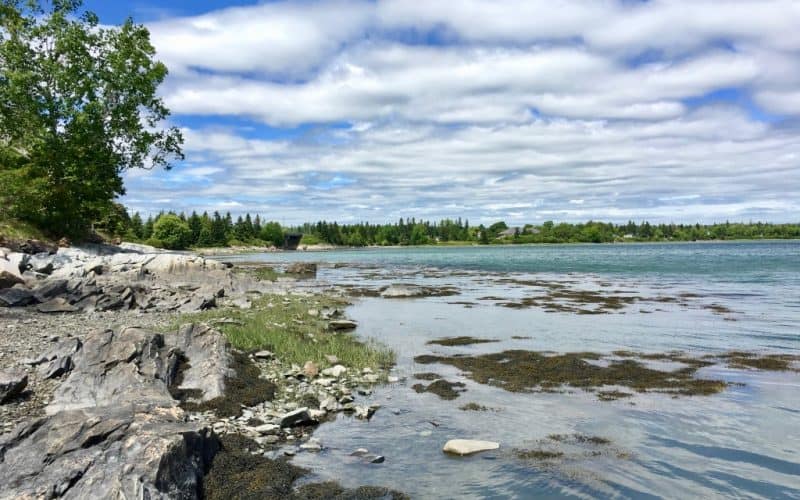 We didn’t visit Maine to visit Acadia, but we couldn’t be near a national park and not take a hike. Acadia was beeeautiful in June, and the chill atop Sargent Mountain was a welcome contrast from the muggy 80s back home in Maryland. We drove up to Mount Desert Island and hiked the Giant Slide Trail up to Sargent and Gilmore Peaks, then popped along the ridge to Parkman Peak as long as we were up there. Lovely views over various bays and sounds.

The bridge to Mount Desert Island has a nice stop on Thompson Island for lovely photo ops of the turquoise water.

The Giant Slide Trail is categorized as difficult. Trail, cascade of rocks with waterfall running through it, po-tay-to, po-tah-to.

Dar is also amazed that this qualifies as a trail. This tree is either holding on for dear life or valiantly holding this man-eating rock back from consuming unsuspecting hikers.

Also a trail, distinguishable only by the presence of blazes. [insert what-in-blue-blazes joke here]

A wee overcast, but still beautiful. Look at those emerald isles.

Paradise, I tell you. This was before it got cold.

Sargent Mountain has some bald spots.

Rapture! I would move here if it were cooler in the summer.

The mountain tops have been scoured by winds over the centuries so they are pretty barren. The summit and trail markers all looked a bit like grave markers. I really wanted to include a photo of Dar sitting at the base of this rock pile, but she was chewing and looked like a very grumpy hamster.

30+mph winds on top of Sargent Mountain! We were cold! We had trouble keeping our balance at points due to the wind.

Bit windy up here. Lean into it!

Second peak of the day, Gilmore!

This is a trail, really. See, it has a blaze.

Cairnucopia! With a dearth of trees on the peaks, the only visible trail markers are often a system of rock cairns. The cairns in Acadia are for navigation with the top rock pointing to the next cairn/trail bit. There are lots of signs explaining the system and asking hikers not to alter them or add their own. You can see some of them in the photo. The painted trail markers are sometimes visible but often hard to spot the next one without the cairns.

A rare sighting of the Eastern Peeping Karen!

Final peak of the day: Parkman Mountain Summit, looking at Bald Peak and the Atlantic. I wonder how they decided which one got to be officially Bald Peak when they’re all devoid of greenery on top?