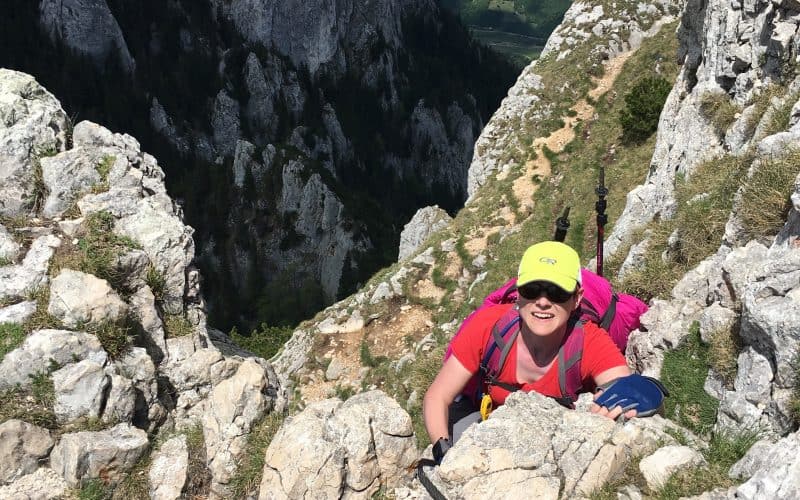 Our route from Măgura to Zărnești took us through Piatra Craiului National Park.

Being neither forewarned nor forearmed, we decided to hike up Piatra Mica, a trail that was depicted as merely “challenging” in the park literature. In the United States, it would have been described as “dangerous to life and limb, only climb with professional equipment”. By the time we discovered that, we couldn’t go backward. Despite this being a trail that neither of us would have knowingly tackled, we scrabbled up it without benefit of the clip-in climbing harnesses that we were later informed by our rock-climbing friend that we should have been using with those steel cables …

We entered the park by walking between two houses in Măgura, down a hill to a path in the forest.

Dar protected us from balrogs.

The climbing trails have fascinating English names like “?” and “23 August”. The accuracy of the park maps rivals that of Patapsco State Park.

Does the second trail #2 turn you into an Italian transexual? Is the weather really that predictable? I have so many questions. I do feel like the grade of the trail we chose is accurately represented by that goat illustration.

Happy biceps to you!

We emerged from the trees into a lovely meadow with a meandering footpath. Only in Europe, footpaths.

The trail led through the meadow, up into the forest, to that cabin you see in the middle, Cabana Curmatura.

The up seemed significant. 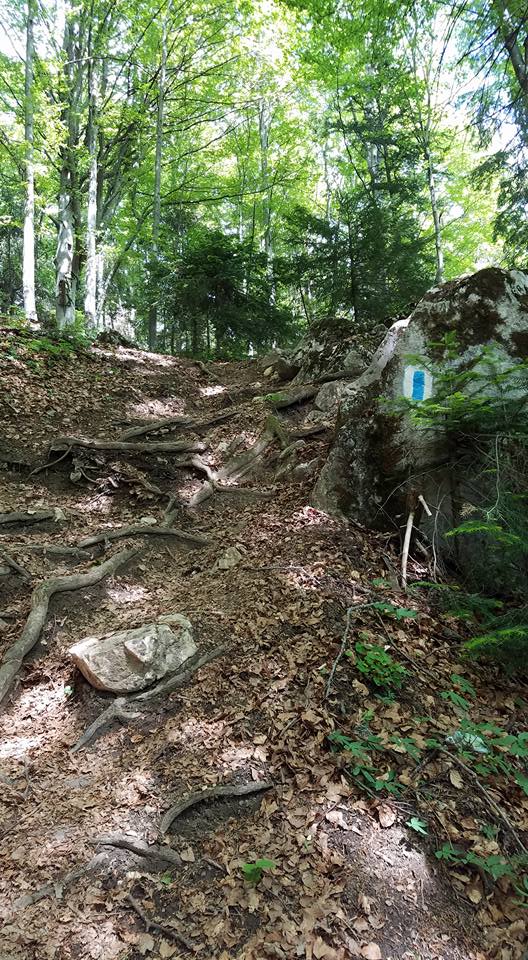 At Cabana Curmatura, you can look out over the great height you have attained. 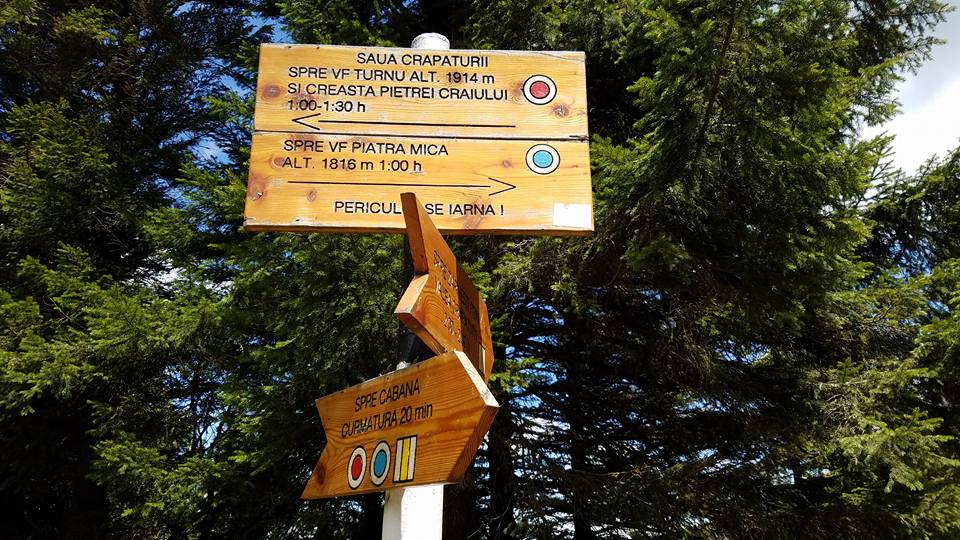 From the cabana, we continued to the Piatra Mica trailhead. Looks relatively benign from this angle.

But when you look down, you can identify it as the point of no return. You’ve just scrabbled up a 60-degree slope covered in loose gravel. If you slipped while trying to back down, there’s a lot more down right past it. But wait .. THE WORST IS YET TO COME.

The trail quickly amps it up from a scrabble to a rock field going up the side of a very steep peak. So steep that there are steel cables bolted to the rock. 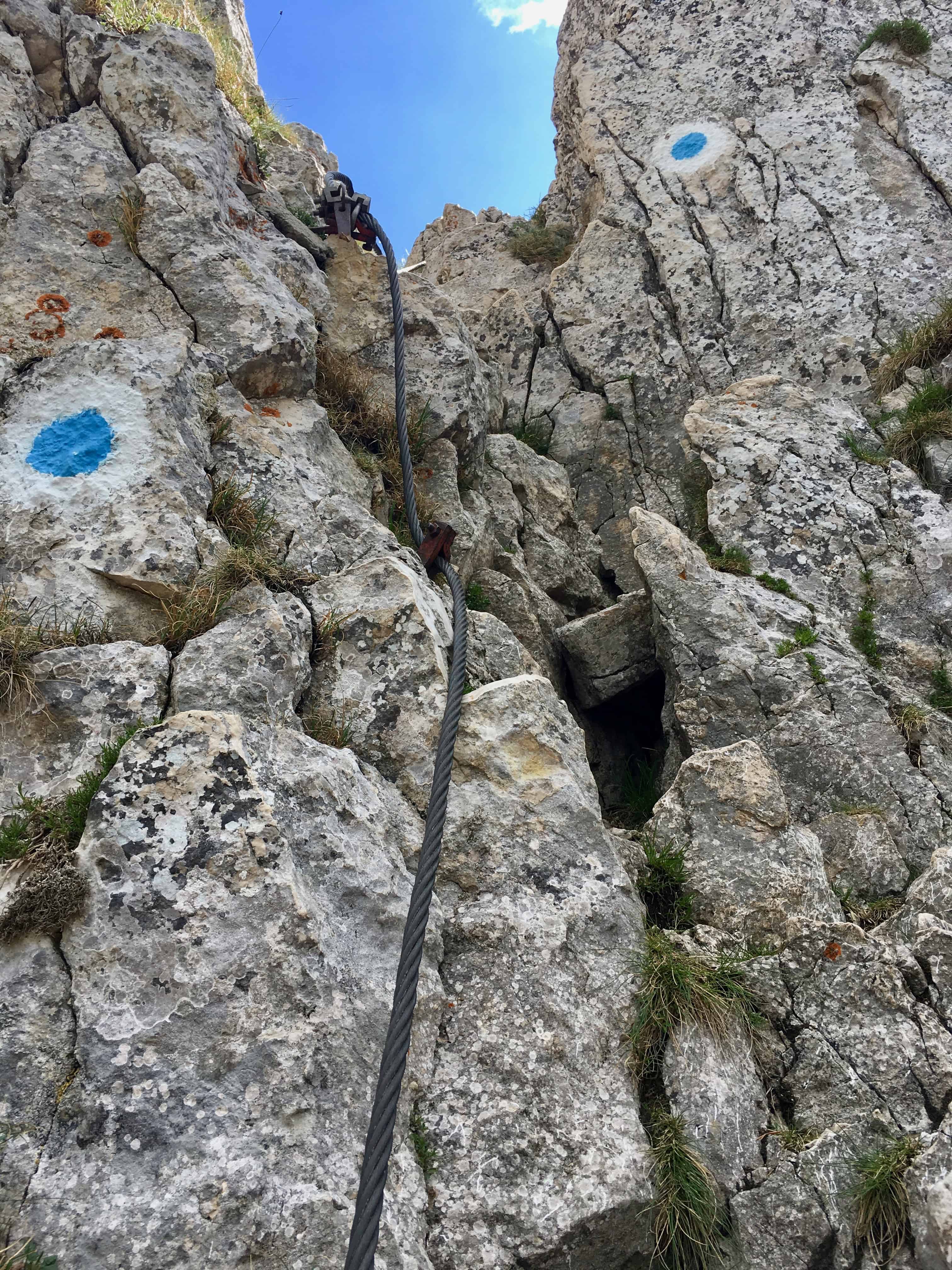 It was only by happening to catch up to an outdoor guide and his girlfriend while they were taking a break that we made it out of this endeavor alive, as we were able to scale certain parts of the trail only after watching him. Once they got moving again, it was clear that we were not going to keep up with them, so I endeavored to keep them in sight, and Dar endeavored to keep me in sight, while assiduously not looking down because vertigo was just not a viable option at this juncture.

Few photos were taken during our desperate pursuit.

After the trail leveled off, we were able to allow our saviors to escape and pause to revel at the views.

There were giant metal crosses at the top.

After a knee-screamingly steep descent through forest, the trail deposits you in an open meadow. Figuring out where the trail picks back up is .. also challenging.